What did you have for lunch today? If it contained meat, not only did you support cruelty to animals, you also supported an unprecedented attack on First Amendment rights, according to an eye-opening July/August Mother Jones cover story on the history of “ag-gag” laws. 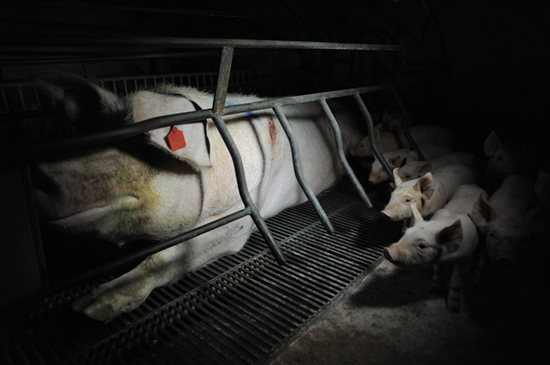 The report starts at what you might call “ground zero” for advocates of “ag-gag” bills—PETA’s 2008 investigation at a Hormel supplier in Iowa, in which workers were caught beating sows with metal gate rods and killing piglets by smashing their skulls against the floor, among other abuse.

This case and others like it have prompted a relentless industry backlash in the form of “ag-gag” bills in nearly two dozen states. The aim of such bills (eight have passed so far) is to outlaw undercover investigations at factory farms and slaughterhouses—a case of criminally blaming the messenger instead of the actual perpetrators of cruelty.

Amanda Hitt, director of the Government Accountability Project’s Food Integrity Campaign, points out that “ag-gag” laws reach far beyond the factory barn doors. “You are also stopping environmental whistleblowing; you are also stopping workers’ rights whistleblowing,” she says. “[Y]ou have given power to the industry to completely self-regulate,” which, she says, should “scare the pants off” consumers.