Early last Wednesday morning, police responded to a call on the 1600 block of S.W. 28th Street in Oklahoma City and found a whimpering puppy whose ears had recently been cut off at the scalp. Animal control officers rushed the 3-month-old Labrador–Golden Retriever mix, now named Rocky, to a veterinary hospital, and he’s expected to recover. 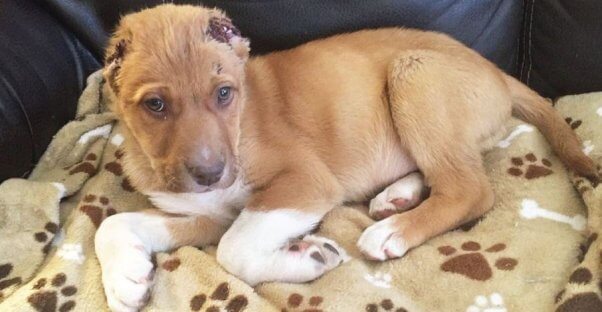 Police are investigating but have yet to make any arrests in the case, prompting PETA to offer a reward of up to $5,000 for information leading to the arrest and conviction on cruelty-to-animals charges of the person or persons responsible for this heinous crime.

PETA is also asking people to help spread the word and post free downloadable posters in businesses and schools, on bulletin boards, and anywhere else that they’re allowed to display them.

“Someone deliberately cut off this puppy’s ears, leaving him crying and in pain until he was found by police,” says PETA Vice President Colleen O’Brien. “PETA is calling on anyone who recognizes this dog or knows someone who has a similar-looking puppy to come forward immediately so that whoever mutilated this puppy can be stopped from hurting anyone else.”

Anyone with information about this case is encouraged to contact the Field Operations Supervisor of the Oklahoma City Animal Welfare Division at 405-297-3117.