PETA’s fieldworkers found Peaches by sheer chance. They had been going door to door in Emporia, Virginia, searching for the owner of a dog they had found running along a busy highway when they came across three puppies loose in a yard. The owners, a man and his daughter, said they didn’t want the puppies and handed them over. There was no mention of the puppies’ mother, so the staffers asked about her. The daughter said yes, she was there, and the fieldworkers could have her, too. As an afterthought, the father mentioned that the dog’s collar was “rubbing her neck” and asked if they would still want her.

Of course, they did.

As they approached the dog, the fieldworkers immediately smelled the stench of infection. The scrawny black Lab–pit bull mix was cowering in a ramshackle, crate-like doghouse that was slapped together with boards and a tarp. She had no food, water, or bedding of any kind, despite the bone-chilling 36-degree temperature. The chain she was bound by, which was attached to a padlocked stake, was so tangled that it allowed her to move only a couple of feet. 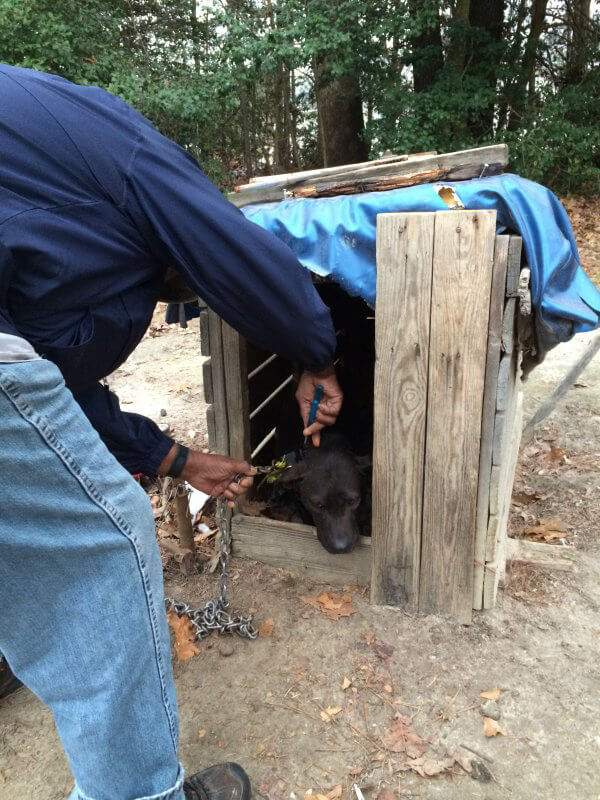 But that wasn’t the worst part, not by a long shot. This was: 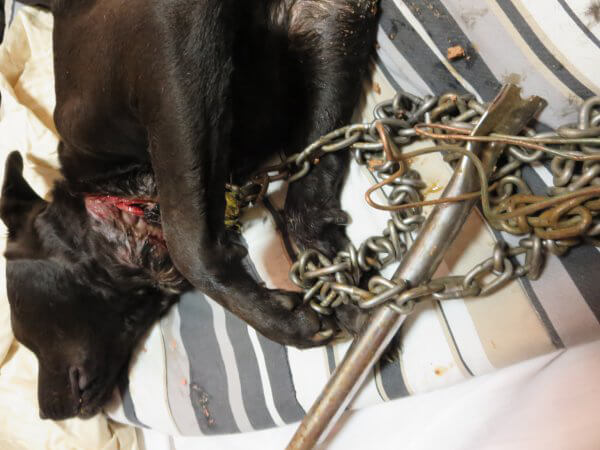 Even our seasoned fieldworkers were horror-struck: Peaches’ too-small collar had been left on her for so long that it had become embedded, causing a massive, oozing wound. The awful smell of dead tissue and infection made their eyes water. 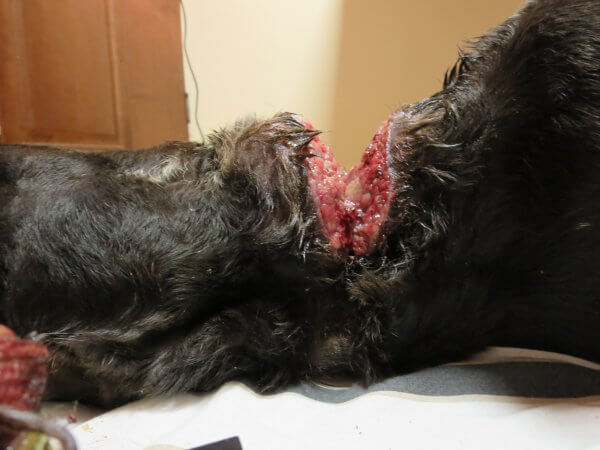 At some point, Peaches’ collar had broken. But instead of removing or replacing it, her owners “repaired” it with wire, which only added to her agony. The wire sawed deeply into her neck causing a bloody gash that was surrounded by infected tissue. Peaches cowered as her owners tried to pull her out of her house by her chain while yelling at the terrified dog to “come on!” Despite the excruciating agony she must have been enduring, Peaches never growled or snapped, but her eyes were wild with fear.

Knowing the shockwaves of pain that even the slightest touch must have set off, our fieldworkers hastily assured Peaches’ owners that we would lure her to the van instead of trying to force her. The staffers created a food trail, which the ravenous dog hungrily followed to our van as the staffers carried the chain and stake along to minimize her discomfort. Peaches’ owners seemed completely indifferent to her obvious misery. Their only concern was that the staffers “return the chain.” 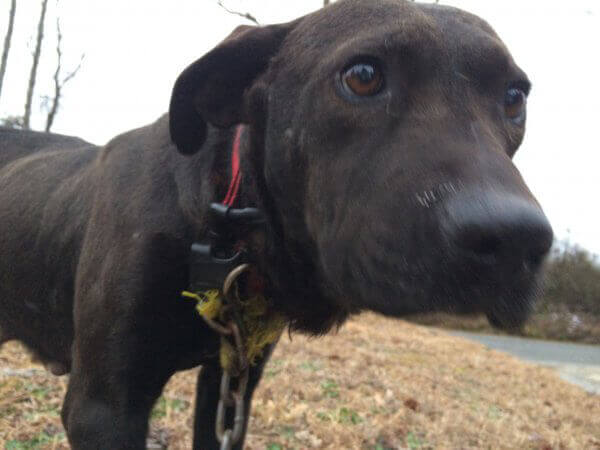 The puppies were taken to the open-admission Virginia Beach SPCA, where they were quickly adopted. After giving Peaches a hearty meal, PETA’s fieldworkers mercifully ended her suffering. Her necropsy report showed that the massive wound caused by the embedded collar was fully 1 1/2 inches deep, just millimeters away from her jugular vein and trachea. The veterinarian estimated that she must have suffered for weeks, if not months, to develop such a catastrophic wound. 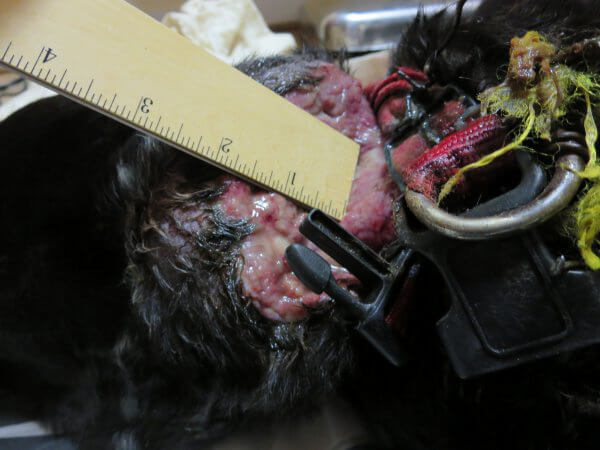 We’ll never know exactly what Peaches endured at the hands of these people, but it’s likely that she gave birth to her puppies outdoors in the cold, alone and afraid, while her neck throbbed with pain. It’s little wonder that she recoiled at even the gentlest touch.

PETA pressed charges against Peaches’ owners, and this week, they were sentenced to 12 months’ jail time (the man will ultimately serve six of the 12 months, and his daughter will serve three) and two years’ probation. Better yet, they have been banned from owning any other animals for life.

Don’t let another dog endure this horrific fate. While Peaches’ case is particularly ghastly, it is not at all uncommon for forgotten “backyard dogs” to sustain gruesome injuries from embedded collars as well as other untreated wounds and illnesses. Keep an eye out for chained dogs in your community, and report any suspected abuse or neglect to authorities right away. Visit our webpage on companion-animal issues to learn how to get a chaining ban passed in your town.