Exaggerated advertising is one thing—but Zoo Med’s lies have been much more sinister, because they’ve caused animals to endure slow, painful deaths. For years, Zoo Med Laboratories, Inc.—a major global supplier of reptile products to PetSmart, Amazon, Walmart, and other retailers—marketed purportedly all-inclusive “pet” snake kits, which are attractive to first-time buyers, who commonly don’t realize, until it’s too late, that snakes confined to too-small, almost barren tanks deteriorate slowly and painfully. But following a PETA consumer protection lawsuit, Zoo Med has removed a claim from its website that snakes may be held in an enclosure only half the length of their body.

What took Zoo Med so long?

According to one study, 75% of reptiles die within one year in a human home.

Reptile experts agree that snakes need at least enough space to stretch out completely, yet Zoo Med has been telling its customers that snakes may be confined to cages “no shorter than half the length of the snake.” 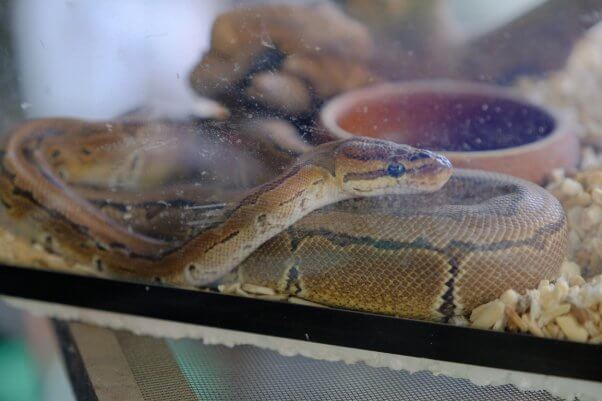 These sensitive animals—some of whom grow to be 10 feet in length—require complex, enriching enclosures longer than their bodies, where they can bask, burrow, and explore. To thrive, snakes also need appropriate lighting, temperature, humidity, ventilation, and substrates. All these requirements are almost impossible to provide in the 20-inch-long tanks that Zoo Med still sells.

But to do right by snakes, the company must stop selling the small, inadequate tanks for snakes—the very ones it’s been lying about—entirely.

Humans and snakes may have different forms, but when it comes to the capacity for pain and the will to live, we’re all the same.

Just like humans, snakes have likes and dislikes that greatly affect their quality of life. Caretakers will attest that snakes have personalities. Some are curious explorers, while others are shy and secretive. Snakes deserve more out of life than an inadequate Zoo Med tank can give them.

For Snakes’ Sake, PETA’s Still at It

Our efforts to hold companies accountable for animal suffering continue: We’re spreading the word that most people can’t meet snakes’ specialized needs, that snakes don’t belong in captivity, and that they shouldn’t be forced to die in someone’s house.

As one expert has stated, “It is not uncommon to see a snake [who] has not eaten in months, has mites, is emaciated, is septic [from a bacterial infection], has pneumonia and is immunocompromised by a viral infection.”

If you believe that you were misled into purchasing a habitat for a snake or another reptile that didn’t meet the animal’s most basic needs—such as being able to stretch out, burrow, and climb—please contact us by clicking on the button below: