As Christians around the world mourn the loss of Pope Emeritus Benedict XVI, PETA’s Christian Outreach Division, PETA LAMBS, is remembering a man of great faith who truly cared for “the least of these.” 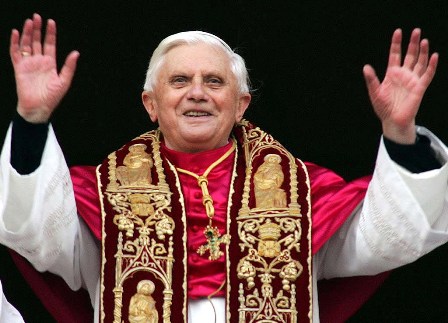 Pope Benedict spoke movingly about the industrialized abuse of animals, particularly those farmed for food. When asked about animals’ rights in a 2002 interview, His Holiness—then a Cardinal—replied, “That is a very serious question. At any rate, we can see that they are given into our care, that we cannot just do whatever we want with them. Animals, too, are God’s creatures . . . . Certainly, a sort of industrial use of creatures, so that geese are fed in such a way as to produce as large a liver as possible, or hens live so packed together that they become just caricatures of birds, this degrading of living creatures to a commodity seems to me in fact to contradict the relationship of mutuality that comes across in the Bible.”

He seemed to have taken note of the teachings laid out in the Catechism of the Catholic Church, which states, “Animals are God’s creatures. He surrounds them with his providential care. By their mere existence they bless him and give him glory. Thus men owe them kindness. We should recall the gentleness with which saints like St. Francis of Assisi or St. Philip Neri treated animals. . . . It is contrary to human dignity to cause animals to suffer or die needlessly.”

And of course, since humans can meet all of our own needs without harming animals, all suffering and death is needless. The Pontiff shared a similar sentiment years later, releasing a statement for the World Day of Peace on January 1, 2010, calling on the faithful to embrace a more “sober lifestyle” and to move “beyond a purely consumerist mentality.”

He promoted compassion for homeless animals, personally caring for homeless cats. And he was one of many theologians to point out that not a single animal was present at the birth of Christ, helping PETA LAMBS encourage churches and communities to spare real animals from being exploited in live nativity scenes.

Pope Benedict knew that God intended for humans to be good stewards, protecting and respecting the beings with whom we share the gift of Creation. PETA LAMBS urges everyone to honor his legacy by doing just that.