Yes, we’re fans, too, so One Direction broke our hearts when reports came in that the band used a live chimpanzee and other animals while filming the music video for “Steal My Girl.” The animals were provided by the infamous outfit Steve Martin’s Working Wildlife. 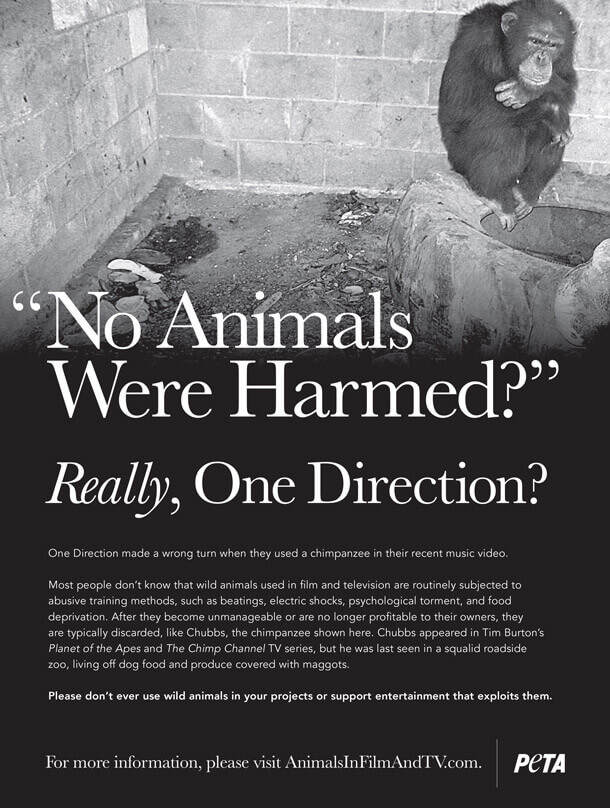 Martin has been cited over and over again by the U.S. Department of Agriculture for violating federal animal-protection laws. He’s failed to provide animals with adequate veterinary care and proper shelter from the elements, and he’s locked chimpanzees and orangutans in cages for up to 18 hours a day. He has also denied animals adequate space, clean cages, and proper food.

Martin has unloaded unwanted wild animals by posting ads in sleazy animal-trade magazines and has dumped them at roadside zoos. Two of the chimpanzees he used ended up at the notorious Garold Wayne Interactive Zoological Park.

Compassionate “Directioners” everywhere quickly took to Facebook and Twitter calling on the band to cut the scenes featuring the chimpanzee from the video. Spoiler alert: The band didn’t.

So PETA took out a full-page ad in The Hollywood Reporter to remind producers, directors, and performers of what they won’t see on set—that baby apes are typically torn away from their mothers at birth, beaten during training, and then discarded like garbage at seedy roadside zoos.

Ask One Direction to do the right thing and pledge never to work with wild animals again.