Experimenters at the Humboldt University of Berlin in Germany recently studied several members of a commonly misunderstood species.  They found that these animals laugh and even jump for joy when tickled … but only when they’re in a good mood. The animals  who were made to be frightened didn’t laugh when tickled.

Who are these complex beings who think, act and feel just like any other member of the animal kingdom? Rats.

Surprised? You shouldn’t be. 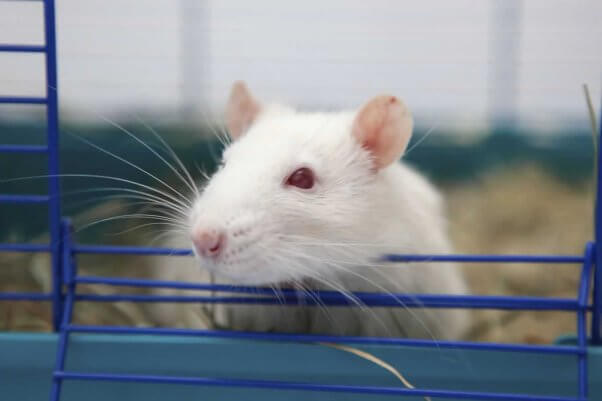 We’ve known for some time that rats enjoy having fun and being tickled – so it’s time to end such experiments and act on the information we have. Studies have consistently shown that rats are as intelligent as dogs, are fast learners, and can recognize their names and respond when called. Extremely social animals, they form close bonds with their families and friends (including humans) and enjoy playing and wrestling. They even “kiss” their human companions’ hands much like cats do. Fastidiously clean, rats groom themselves numerous times every day and are less likely to transmit viruses than cats and dogs are.

Several cruel studies have also proved that rats possess incredible empathy. In one unethical experiment, the vast majority of rats chose to help another who was being forced to tread water – even if they did not know the other rat – instead of getting food.

Of course people who have shared their lives with companion rats have long known that rats are intelligent and playful members of the family. Knowing that rats feel pain and suffer just like humans should be all anyone needs to know to understand that it’s wrong to use them in experiments. These smart, sensitive, charming animals are abused and killed by the millions in laboratories every year, and they’re denied even the minimal protections of the federal Animal Welfare Act (AWA).

Make a Difference for Rats

Urge your members of Congress to extend the AWA to protect rats and mice.