After PETA released video footage sent to us by a whistleblower inside Shin Nippon Biomedical Laboratories (SNBL) in Everett, Washington, showing egregious abuse of monkeys inside the laboratory, area residents were so outraged that they decided to do something about it. More than two dozen residents, local PETA supporters, and members of Action for Animals held signs and chanted slogans outside SNBL during the morning commute, calling on the company to stop its mistreatment of animals and switch to humane, non-animal alternatives. 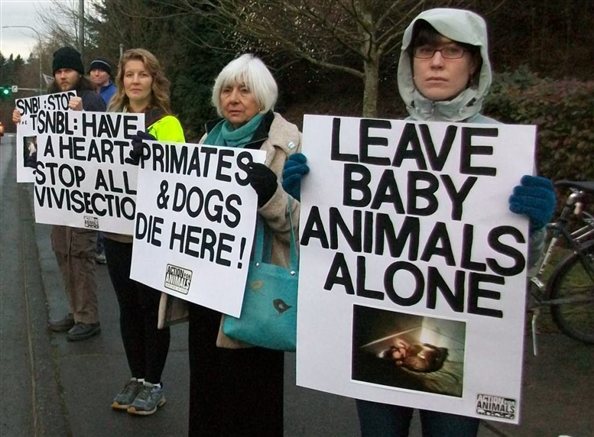 According to the whistleblower, monkeys at SNBL have their blood drawn so many times a day that their veins become damaged and workers dig and poke for a spot to draw blood as the monkeys scream in pain and try to jerk away. The whistleblower reported, “Eventually, many of the monkeys stop fighting and reacting … it is like the life is gone from them.” Monkeys are also immobilized in restraint chairs for many hours while workers pump drugs into their bodies. They struggle to break free but sometimes collapse under the physical and emotional stress. Some of the monkeys never recover.

The protesters in Everett didn’t get mad—they got active! You can, too, by clicking here to urge the airlines that are still delivering primates to SNBL and other laboratories to ground the practice.