Things just keep getting worse for the folks at POM Wonderful, who (in case you’re not up to date on this) can’t seem to figure out why performing gruesome experiments on rabbits in order to sell more juice is as ludicrous as it is frightening. This week, right after two stores in California decided to ban sales of POM, the legendary nightclub promoter Steve Lewis sent POM CEO Matt Tupper a letter asking him to stop his animal testing program. If Matt agrees, Steve has made a commitment to use his considerable influence to get POM promoted in nightclubs throughout New York. The New York Post did a piece on the story, which you can read here.

Then, just as all this was happening, PETA’s Pom Campaign Coordinator—the lovely Melissa—broke her leg. I admit that sounds like it would be more of a blow to us than it is to POM, but check out what she did with her cast! How do you like them apples, Matt Tupper? 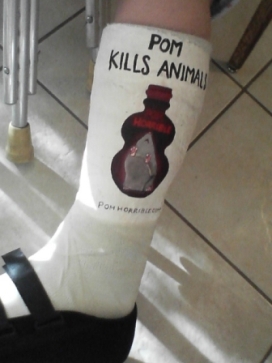 P.S. Stay tuned for details on exactly how Melissa broke her leg. I’m still trying to get the story out of her. All I know at the moment is that it happened on New Year’s.

The British Medical Journal on Why Animal Testing Sucks

Predict Your Own Death! (Accuracy Not Guaranteed)