According to reports, a puppy was found “near death” inside a truck in a Carrollton, Texas, Home Depot parking lot after his owners were arrested for switching price tags inside the store. The dog reportedly had gotten into and ingested heroin left in the vehicle by the owners and, according to local veterinarians, was showing symptoms of an overdose. Listen to the bizarre story here:

Thanks to the quick work of the Carrollton Police Department, the dog—now bearing the new name “Lucky”—is expected to make a full recovery and will soon be up for adoption. People all over the country who have heard his harrowing tale have expressed interest in giving him the safe, loving life that he deserves. To show our thanks to the officers, PETA is sending them a Compassionate Police Department Award and a box of vegan chocolates.

Even if drugs hadn’t been in the truck with Lucky, animals left unattended in parked vehicles face great danger. On a 78-degree day, the temperature inside a parked car can soar to between 100 and 120 degrees in mere minutes. Dogs left in hot cars can quickly show symptoms of heatstroke, including restlessness, heavy panting, vomiting, and lethargy.

While his new name may be Lucky, we know that this puppy’s rescue isn’t the result of chance but is instead thanks to the veterinarians who treated him and the Carrollton Police Department’s readiness to protect and serve both humans and animals. We hope these officers’ kindness will inspire people everywhere to keep an eye out for animals in danger. 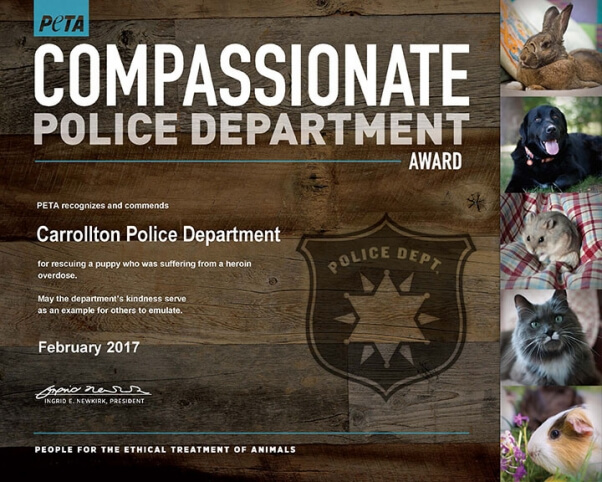 Read more: 13 foods that are BAD for dogs