From undercover to uncovered: PETA’s most recent investigation into Plainville Farms—a certified “humane” company that supplies major grocery stores, including Publix and Wegmans—is laying bare the truth about that “happy meat” myth. On farms supplying Plainville, workers attacked birds to instill fear, vent their frustration, or relieve their boredom; kicked and stomped on turkeys as hard as they could; and used turkeys’ bodies to mimic sex acts. Now, while Plainville feigns shock at PETA’s findings and stalls in ending the abuse, we’re upping the ante against the company: A new billboard erected down the road from Plainville’s headquarters and slaughterhouse invites viewers to visit PETA.org/Turkeys to see the video footage for themselves. The same artwork will appear in the August 22 editions of the York Daily Record and The Patriot-News, two local newspapers. 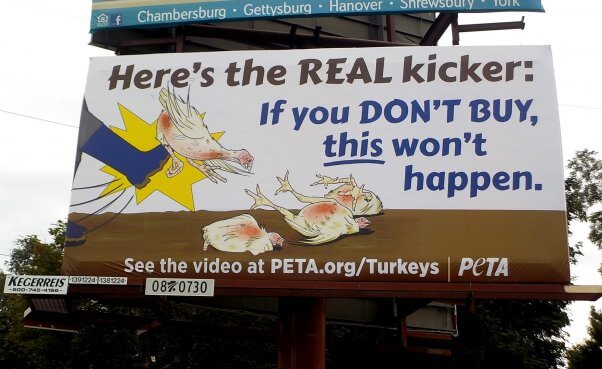 This violence was perpetrated at farms certified by Global Animal Partnership (G.A.P.). It’s consumer fraud for these turkeys’ packaged carcasses to be marketed as if they were “happy meat” that was produced “humanely” in a “stress-free environment,” and PETA warns everyone not to fall for it.

What Else Is PETA Doing to Help Turkeys?

We’ve submitted evidence to the Pennsylvania State Police, which has opened an investigation; urged Plainville Farms to terminate the abusive workers; and called on G.A.P. to change its certification program by prohibiting labeling designed to deceive customers. We’re also urging grocery stores to investigate their suppliers and highlight their many vegan options, including vegan turkey slices and roasts.

Thanks to our popular rapid-action function, firing off multiple e-mails to those perpetuating this abuse is as easy as clicking a few buttons—join us in speaking out:

You Can Help Stop Turkeys’ Suffering—by Not Paying for It

Turkeys are caring parents and spirited explorers who feel pain—and no one has any right to kick or beat them. The “humane” label is a scam, and PETA is offering free vegan starter kits to help anyone who doesn’t want to support this abuse. Get one today: