On the first day of this year’s East Coast commercial seal slaughter—and in the midst of tax season—PETA members gathered in Ottawa, Ontario, and poured buckets of “blood” over their heads in an appeal to lawmakers to end the carnage, which kills tens of thousands of harp seals and costs Canadian taxpayers about $7 million every year, according to a study at the University of Guelph. 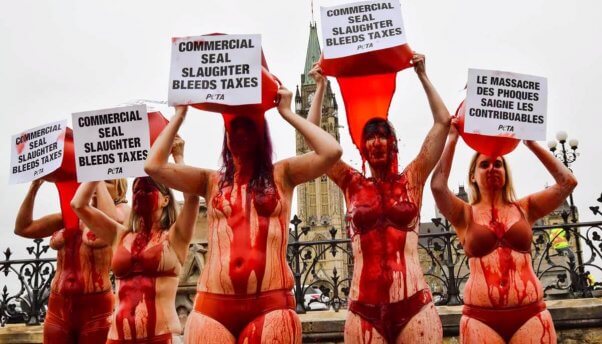 “Canada enjoys a reputation as a peaceful country, but it remains woefully slow in ending its ritualistic slaughter of gentle young seals,” says PETA Senior Vice President Dan Mathews. “PETA urges Canada to stop bleeding both taxpayers and seals dry and to shut down this massacre.”

During the commercial slaughter, seals are left to suffer from gunshot wounds until sealers arrive to crush the young animals’ skulls with a hakapik. Veterinarians who’ve investigated the carnage found that sealers routinely fail to comply with Canada’s animal-welfare standards. There is no market for seal meat and few remaining major markets for seal fur, as the U.S., the EU, and Russia have all banned it.

Help save seals from slaughter!