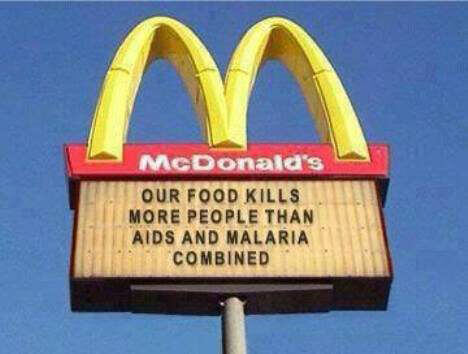 Right about now, you might be thinking to yourself, “Whoa, that’s a lot of people,” or maybe, “Wait a minute—how many people get malaria, anyway?” Glad you asked, because we did the math. According to the group Malaria No More, 660,000 people worldwide die of malaria every year, most of them in Africa. That sounds like a lot of people, doesn’t it? That’s because it is a lot of people. But shockingly, even combined with the 15,529 people who died in the U.S. because of HIV/AIDS in 2010 (the latest year that statistics are available online from the Centers for Disease Control and Prevention), it still doesn’t eclipse the number of people who die every year in the U.S. alone from some of our nation’s top killers. Nearly 598,000 Americans died of heart disease in 2010. An additional 129,476 people died from a stroke, and 69,071 died of diabetes. So if you tally that up, you get roughly 797,000 people “killed” by the diseases most commonly linked to eating high-calorie, high-fat diets packed with cholesterol and animal fats like those found in greasy McDonald’s burgers and nuggets. Gives new meaning to the term “Big Mac attack,” doesn’t it? Hand me a vegetarian/vegan starter kit, STAT!