Whether arguing that orca Lolita’s tiny tank violates the Endangered Species Act, suing to have suffering chimpanzee Joe freed from a dumpy roadside zoo, or working to ensure that the money from Naruto’s selfie goes to help him and his fellow endangered macaques, the team behind the PETA Foundation’s litigation efforts never fails to grab headlines, break new ground, and put animal rights in the spotlight. And now our legal department has achieved another first: It’s the first legal team from an animal advocacy organization to earn Corporate Counsel magazine’s prestigious nationwide Best Legal Department of 2017 honor. In the history of this award, only one other nonprofit organization has ever won. 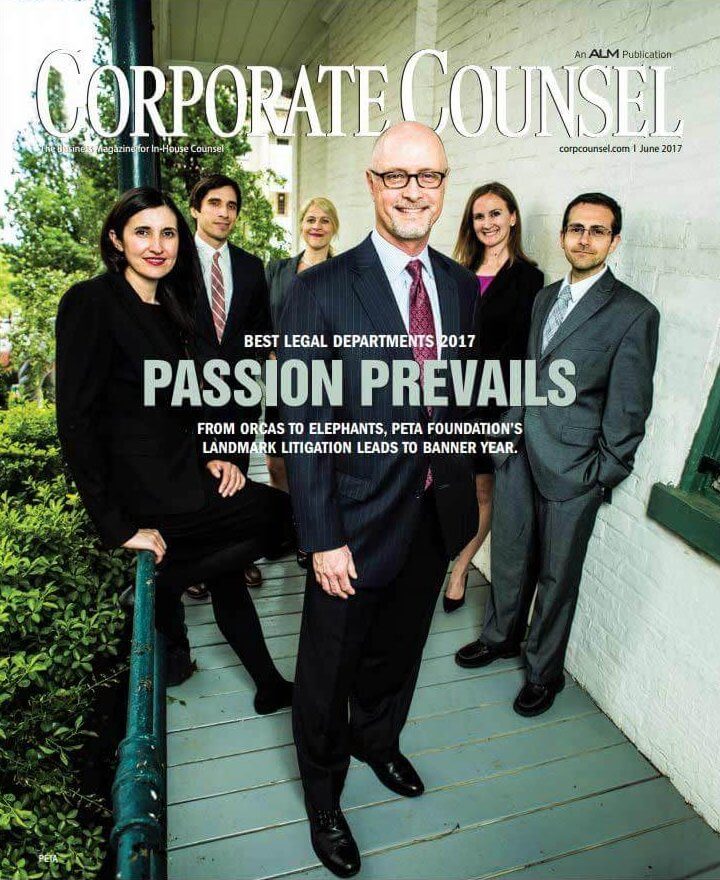 Corporate Counsel said of its decision to give the top honor to PETA’s legal team:

“[T]he award is decades in the making. After all, that’s about as long as it took to bring down a nearly 150-year-old institution, the fabled Ringling Bros. and Barnum & Bailey Circus.

As if that win weren’t enough, PETA also recently defeated SeaWorld San Diego’s request before a California regulator to expand its orca tanks, forcing the tourist attraction to announce that it will no longer breed orcas, a David-and-Goliath battle whose outcome was far from certain.

Regardless of one’s opinion of PETA’s crusade against Ringling Bros. and SeaWorld, it would be difficult for even their fiercest opponent to ignore that it was the activist group’s attorneys’ tough legal minds that have fundamentally shifted the animal law landscape in this country.”

The 19-attorney team protects our investigators as they carry out their vital work and uses the Freedom of Information Act to gain access to laboratories’ records about their experiments on animals, along with pushing for bullhook bans, chaining ordinances, and spay-and-neuter laws. And the team chips away at abusive animal exhibitors like the Mobile Zoo, filing mounds of complaints that result in inspections and citations until the fines pile up, public opinion shifts, and the foe finally  falls.

Our legal team reaches its goals only because of you. Your donations pay PETA’s legal fees as our attorneys take on well-funded opponents in the courtroom. And because of you, animals win. If you’re not already a PETA member, please consider joining us for just $16 a year.

Yes, I Want to Be a PETA Member