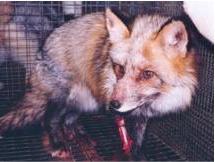 Having been on the receiving end of a few coolly worded e-mails from our Legal Department myself, I have a suspicion that JCPenney is in a world of pain after hearing from PETA’s attorneys this week about the company’s claim that it does not condone the “illegal or inhumane treatment of animals.” Given that this is pretty much the only response we get from JCPenney every time we try to talk to them about their refusal to stop selling fur, there’s been a fair amount of head-scratching round here about what the hell the company thinks it’s up to. Anyway, nobody likes to have to bring out the lawyers, but when your big-ass company is selling fur from places that have literally zero cruelty-to-animals laws and you have no publicly available standards of your own defining what you consider to be humane treatment, you just can’t get away with telling consumers that you don’t condone illegal or inhumane treatment of animals and expect people to let you go about your business as if nothing’s wrong. So what’s the deal, JCPenney? Does all your fur come from roadkill, maybe, or do you in fact pay people to rip it from the backs of defenseless, tortured animals just like everyone else who profits from the fur trade?