Much as it pains me to pamper the egos of those too-cool-for-school scene queens over at peta2, I was really impressed with this interview that my friend Dan (who runs the show in PETA’s Youth Outreach division) just did with MTV Canada. I’ve been trying to get on MTV since I dreamed of auditioning for MTV’s The Grind in the early ’90s (if you haven’t heard of that show, don’t worry about it. You’re better off.), but it looks like I’m going to have to settle for living vicariously through Dan’s achievement. Watch how he reels off hip bands like he’s Carson Daly or something. You can click the screenshot below to watch the video on MTV’s site. Enjoy! 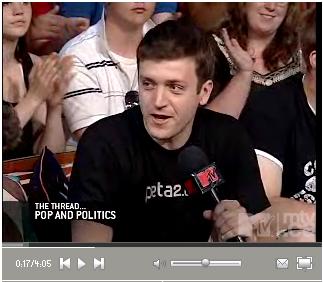