Austin, Texas, is going to the dogs—specifically, the ones in Texas A&M University’s (TAMU) dog lab, being tormented in pointless and deadly muscular dystrophy experiments. For all of March, these moving billboards, which are meant to reach as many people as possible in this time of social isolation, will run on the exterior of four buses and the interior of more than 50 buses in downtown Austin. 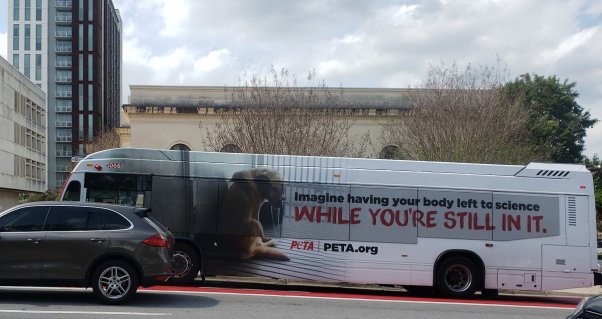 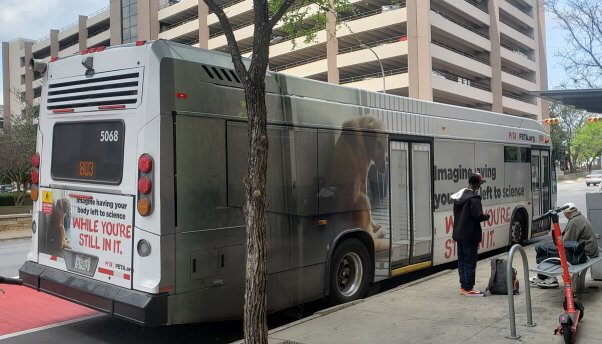 Texas’ capital city isn’t far from the school where experimenters have bred dogs to have a rare canine form of muscular dystrophy and are subjecting them to cruel and wasteful experiments purported to study the human form of the disease. But partly because of vast biological differences between species, in nearly four decades, these experiments haven’t produced a cure or a single treatment that reverses the disease’s symptoms. They have only wasted lives and squandered research dollars.

The dog featured in PETA’s ad is an actual TAMU dog lab victim named Peony. She was bred to develop a form of canine muscular dystrophy that caused her tongue to enlarge, making her salivate uncontrollably. Ropes of saliva, as seen in the ad, hung from her mouth. Suffering in her barren cage, it was difficult for her to swallow, eat, and even breathe. TAMU experimented on her and then killed her.

PETA is calling on TAMU alumni to halt their donations to the school until the dog experiments end. And we’re urging legislators to call for an end to these wasteful studies. Until then, our campaign against the school will only get louder. Five hundred physicians have told TAMU to call off the experiments. And you can, too: