This may be what you’re used to thinking of as an anti-viv poster: 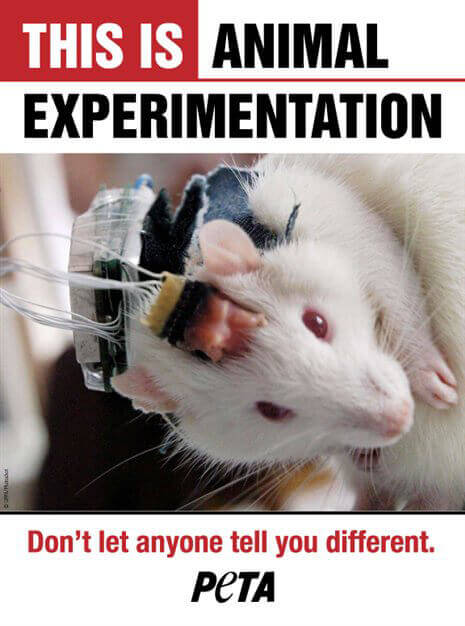 But nowadays, you’re just as likely to see this as an anti-viv poster: 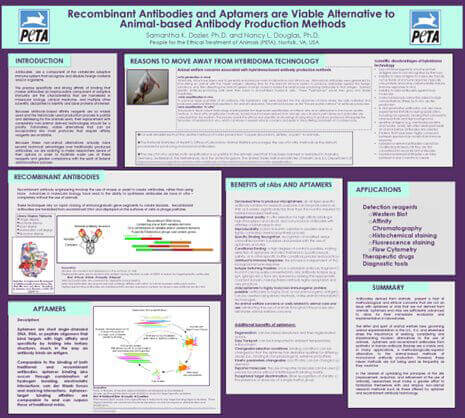 That’s because PETA has a squadron of scientists who meet with government regulators, serve on expert working groups, put pressure on international corporations, publish in scientific journals, and make presentations at international scientific conferences like the one that took place in August in Montréal.

The World Congress on Alternatives and Animal Use in the Life Sciences is the premier international conference on alternatives to animal testing. (Yes, we know that the “and” in the title should be “to” and have mentioned that to the organizers.) Even though animal experimenters attend the conference and peddle their wares and displays touting cruel experiments like force-feeding animals Jerusalem artichokes (seriously), there is also a lot of excellent information presented on non-animal testing methods and strategies.

Five PETA scientists presented displays and gave talks at last week’s conference about ways to avoid using animals in endocrine testing, skin testing, and other tests. Our presentation on vaccine testing evidenced how PETA has succeeded in using a variety of pressure points to save thousands of animals from being used in cruel vaccine testing, including convincing the U.S. government to replace the use of pigs in painful erysipelas vaccine tests. Another PETA scientist addressed attendees regarding new non-animal technologies that can replace the use of mice in antibody production work.

With close to 1,000 participants from more than 50 countries at the conference, PETA’s scientists were encouraged to note how many companies and laboratories represented at the Congress are actively working on technology and testing methods that can reduce or replace the use of animals. Not only are these methods 100 percent humane, they are also less expensive, more effective, and faster than animal tests.