Update: As soon as the Ramos Bros. Circus showed up in Los Angeles, people began to contact us to report that the circus’s animals looked sick and that they were jammed into filthy cages. Ramos Bros. failed to inform the U.S. Department of Agriculture (USDA) of its whereabouts—which is a requirement so that the agency can conduct inspections—but following our complaint, a USDA inspector found that the circus has not updated its veterinary-care program since 2010, that camels and llamas had overgrown hooves (an often painful condition), and that animals were housed in enclosures with rusty, broken fences.

Update: Following PETA’s complaint that Ramos Bros. Circus was exhibiting exotic animals in Moreno Valley, California, without a USDA license, Moreno Valley Animal Services “ordered the circus to stop this activity at the Moreno Valley site” until it has the proper federal permits.

PETA is calling on the U.S. Department of Agriculture (USDA) and Moreno Valley, California, officials to stop performances by an unlicensed animal exhibitor. On April 2, the USDA canceled the Ramos Bros. Circus’ license to exhibit animals—without this license, it is illegal to exhibit animals. Yet Ramos Bros. is performing in Moreno Valley, in violation of federal law. 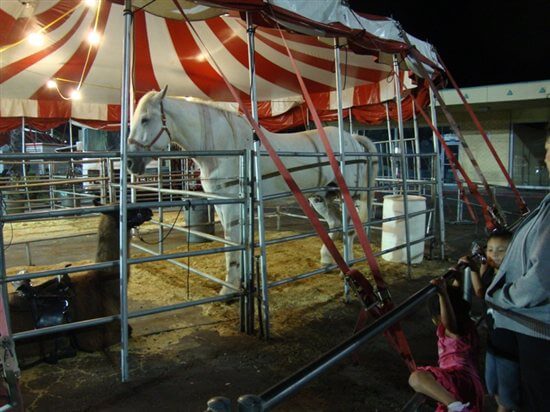 The circus’s disregard for the law is nothing new: The USDA has previously cited Ramos Bros. for operating without a license. Last year, when Ramos Bros. illegally exhibited exotic animals in Corona, California, PETA notified city officials, who took immediate action, ordering the circus to remove the prohibited animals from the city.

Ramos Bros. has a horrible track record when it comes to taking care of animals. In January, the USDA issued it a warning for violating the Animal Welfare Act after a 4-year-old camel ran into the street, endangering both herself and others. PETA has received numerous reports that Ramos Bros. ties animals up so tightly that they cannot stand, forces them to live in urine- and feces-covered enclosures, and fails to provide them with adequate water and shade.

The abuse of animals is not entertaining. Please enlist everyone you can to help us end cruelty to animals in circuses and enjoy animal-free circuses instead!