Updated May 25, 2018: Victory! Your comments worked. The U.S. Department of Agriculture (USDA) has announced that it won’t allow inspections by private, industry-friendly groups to be used as an excuse to reduce the frequency or thoroughness of its own inspections of laboratories and other animal-abusing facilities under the federal Animal Welfare Act (AWA). In its statement on the decision, the agency said that it received more than 35,000 written comments on this proposed change, which, if implemented, would have led to more suffering and abuse of animals imprisoned in laboratories, puppy mills, circuses, and roadside zoos. The agency found “the vast majority of the comments [it] received to not be in favor of establishing new criteria for recognizing third party inspection and certification programs.” We know many of these comments came from our supporters. Thank you for speaking up!

Updated March 8, 2018: The U.S. Department of Agriculture (USDA) met in Tampa, Florida, to hear public concerns about its plan to use the accreditation of laboratories, puppy mills, roadside zoos, circuses, and other businesses by private third-party programs as an excuse to reduce the frequency or thoroughness of federal inspections of these places. PETA showed up to advise officials to stop considering such an assault on transparency and the oversight of facilities that use and abuse animals.

PETA supporters also pointed out that reduced oversight and fewer inspections by federal officials would jeopardize the welfare of animals. And a reliance on third parties would limit the public’s access to information about federal Animal Welfare Act violations and compliance.

Learn why PETA sued the USDA and more on The PETA Podcast:

Federal oversight is supposed to ensure that laboratories, roadside zoos, and puppy mills can’t cut corners at the animals’ expense. Until this third-party nonsense is stopped, PETA will continue to remind the USDA that a hands-off policy would leave animals at the mercy of the very people who are making money off them.

Updated March 1, 2018: PETA filed a lawsuit against the U.S. Department of Agriculture (USDA) challenging that agency’s failure to provide information on its method for determining the frequency of inspections—required under the federal Animal Welfare Act—of laboratories and other animal-abusing facilities. PETA has been waiting for well over two years for this basic information. In October 2015, we submitted a public records request, but the USDA never responded.

The agency recently announced that it’s considering making changes to its inspection criteria, including requiring fewer and less-thorough inspections for locations that have third-party accreditations (see below for more details) and even allowing those inspections to be announced—even though such facilities can actually have higher rates of animal-welfare violations than non-accredited ones. So once again, PETA asked the USDA for its current inspection criteria. There has never been a greater need for this information to be made available, since the agency has asked for public input to help it determine what changes should be made to its current inspection process. It’s impossible to provide meaningful input when the USDA refuses to reveal its current criteria.

In response to our second query, the USDA said that PETA would have to submit a public records request—the very thing that we did more than two years ago. We’ve had enough of this stonewalling, so we’re suing. We’ve asked the court to rule on our request quickly. In the meantime, you can take action below.

Tell the USDA: Do Your Job to Protect Animals in Labs!

This week, the U.S. Department of Agriculture (USDA) hosted the first of its “listening sessions” —in which officials and stakeholders discuss the possibility of privatizing oversight of facilities regulated under the federal Animal Welfare Act (AWA)—and you can bet your boots we showed up in droves to voice our unfiltered opinion. 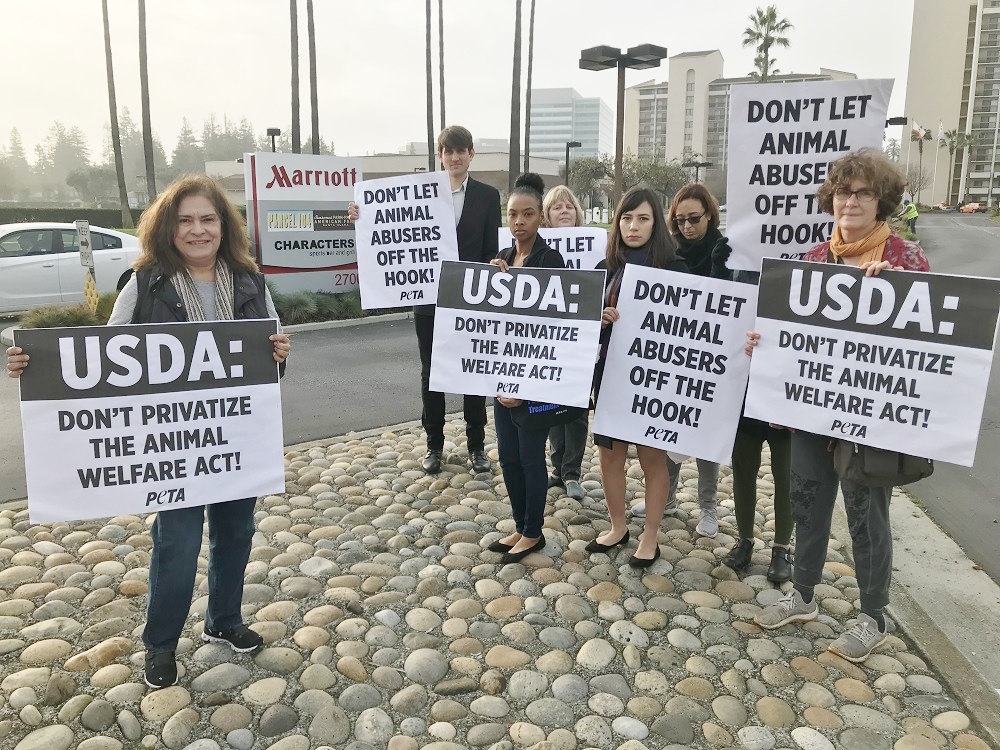 Armed with signs proclaiming, “Don’t Let Animal Abusers off the Hook!” and “USDA: Don’t Privatize the Animal Welfare Act,” PETA supporters demonstrated outside before going in and speaking during the time for public comments. 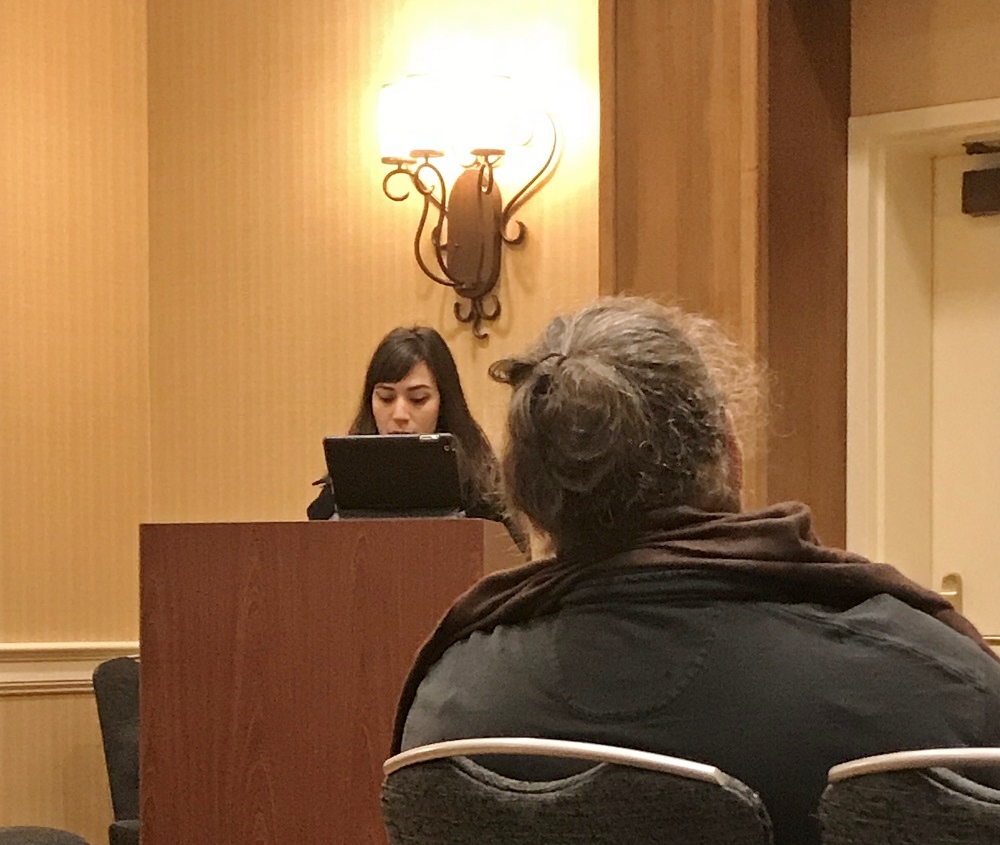 “PETA calls on the USDA not to relinquish its duty but rather to remain committed to rigorous enforcement of the Animal Welfare Act,” says Dr. Ingrid Taylor, a PETA veterinarian. 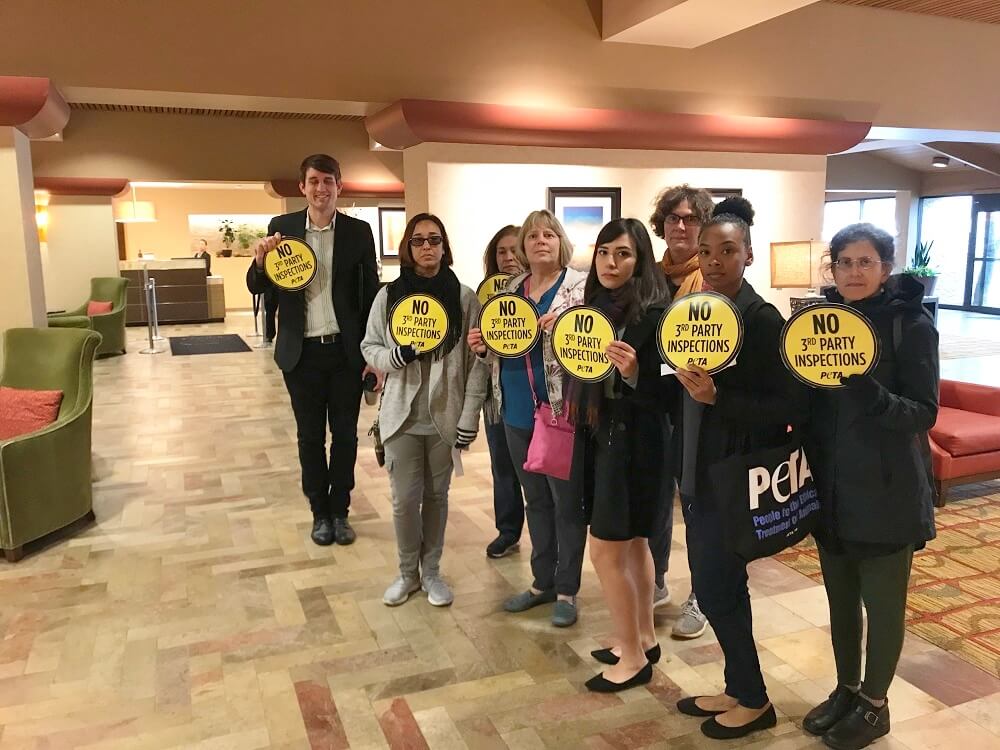 Under current federal law and practice, USDA officials conduct unannounced inspections of regulated businesses, including puppy mills, roadside zoos, animal dealers, circuses, and university and commercial animal experimentation laboratories, to ensure that they’re complying with the bare minimum federal standards for the treatment of animals. The AWA was enacted in 1966 and strengthened in 1985 following PETA’s release of video evidence showing abuse, precisely because these industries failed to police themselves effectively.

Third-party accreditation is a “charade” standard.

PETA notes that third-party accreditation does not guarantee that laboratories or other facilities will adhere to even minimal animal-welfare laws. A peer-reviewed study of USDA records shows that laboratories certified by the largest third-party accreditation firm violate the AWA more frequently than those without accreditation. Recent violations at such “accredited” facilities include incidents in which animals died from starvation or dehydration after staff failed to provide them with food or water, injured and sick animals were left untreated, and animals were scalded to death in automated cage washers.

PETA knows how horribly these industries treat animals even when they’re subject to USDA inspections.

In over three decades, we’ve exposed myriad animal abusers—from a dealer’s mill where workers froze animals alive to a ferret-breeding factory farm where hundreds of newborn and young ferrets died from dehydration and starvation on waste-covered concrete floors. We know that these industries are capable of boundless neglect and abuse for the sake of a buck.

These places are untrustworthy. We’ve reported on countless shoddy roadside zoos, such as Wildlife in Need, which once attempted to fabricate records and conceal the presence of two ailing tiger cubs who were bleeding, hesitant to walk, and in apparent pain. Another company, Primate Products, Inc.—infamous for its horrific abuse and neglect of monkeys destined for experiments—filed a lawsuit against the state of Florida to keep its public records private.

Imagine if these sickening entities were able to police themselves!

Help PETA Stop the Privatization of the AWA

Privatizing inspections adds insult to injury, as USDA inspections are already extremely lacking. PETA is calling on the USDA not to let these industries put animals at the mercy of the very people making money off them. Add your voice to ours today.

Tell the USDA: Do Your Job to Protect Animals in Labs!