Is it possible to be a “pro-life” meat-eater? Not according to the PETA members who appeared outside the Dane County Courthouse in Madison, Wisconsin, as preliminary hearings began for a man accused of planning to shoot a doctor at a Madison Planned Parenthood clinic. 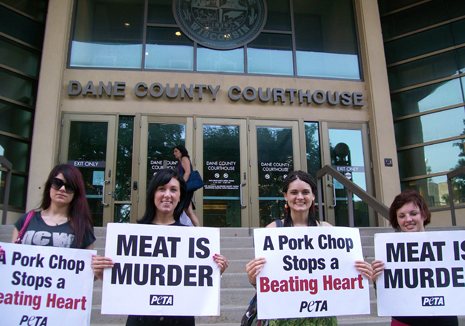 The meat and dairy industries are responsible for the suffering and deaths of billions of babies every year. Cows on dairy farms are kept continually pregnant in order to boost milk production, and their babies are taken from them almost immediately after birth and raised for veal. Pigs are also repeatedly impregnated, and their babies are torn away from them and shoved into cramped, filthy pens until they are large enough to kill, usually when they are just 6 months old. Chickens raised for meat are only 7 weeks old when they are killed.

If pro-life advocates want to prevent cruelty to babies, they should start at the dinner table. And since animals don’t get to choose whether they will be abused and slaughtered, this is one issue that pro-lifers and pro-choicers should be able to agree on.