Would you consider it humane to crowd pigs into a cramped shed and allow them to languish with illness and injuries, including lameness and bulging rectal prolapses? Whole Foods seemingly thinks you should. Following PETA’s exposé of a Whole Foods “happy meat” pork supplier that revealed abuse and neglect of pigs, we filed a class-action lawsuit and are protesting at Whole Foods stores across the country to demand that the chain stop misleading shoppers with its claims about “humane meat.” 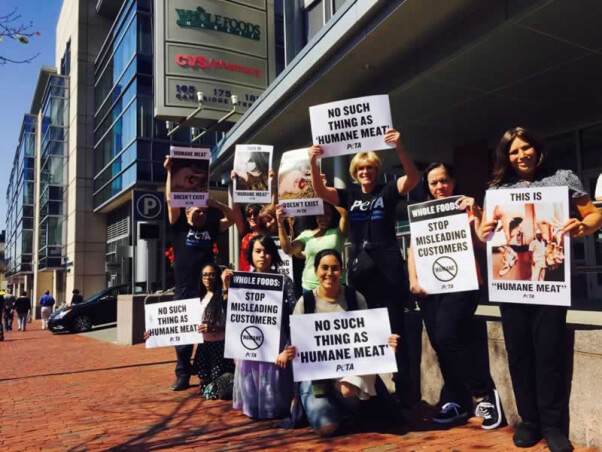 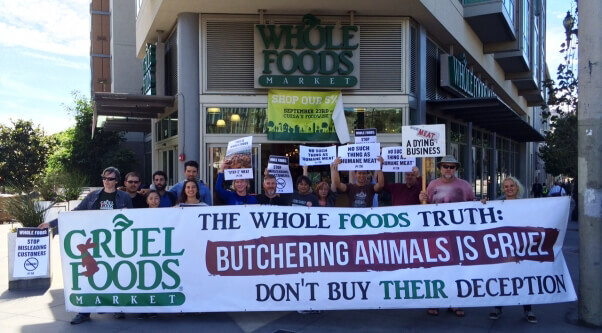 PETA has exposed multiple discrepancies between Whole Foods’ “5-Step™” animal-care standards and the daily reality for pigs at Sweet Stem Farm. Some pigs were given only about 5 square feet of space on a concrete floor, and none of them had access to the farm’s lush green grass. Pigs were left to suffer from fever, lameness, bleeding rectal prolapses, and other conditions for weeks without being examined or treated by a veterinarian, to the eyewitness’s knowledge. And although Whole Foods claims, “Our Meat: No Antibiotics, Ever,” many pigs who were given antibiotics were sent to a slaughterhouse that supplies the chain.

Whole Foods is conning shoppers into buying its expensive meats, and animals are paying the price.