PETA President Ingrid E. Newkirk has always said that change comes from the grassroots, and she could be found in the fray this weekend, reminding diners at Linda Bean’s Freeport, Maine, restaurants to, as David Foster Wallace put it, “consider the lobster”—and the crabs, too. 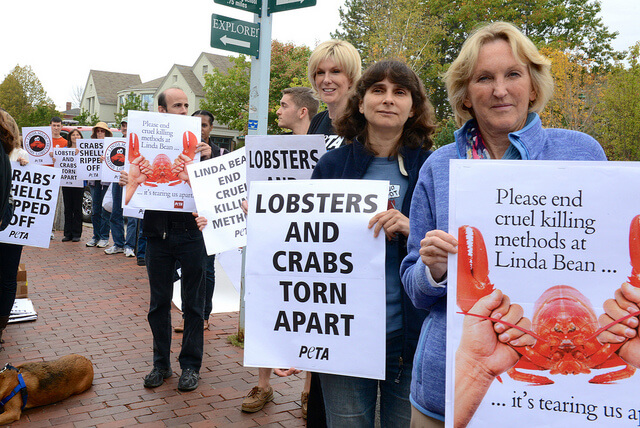 Linda Bean’s Maine Lobster (LBML) slaughterhouse is the site of one of the most egregious abuses of animals—live dismemberment—that she’s seen in her decades of activism.

In her book Making Kind Choices, Ingrid tells the story of the first animal she stopped eating: lobsters. She realized that, not having vocal cords with which to protest, the lobster she had ordered broiled (alive) might have been trying to communicate by waving antennae

Armed with posters and a TV screen, Ingrid and other activists showed diners and would-be diners PETA’s groundbreaking video footage of workers at LBML ripping and tearing the legs, heads, and shells off live lobsters and breaking apart conscious crabs’ shells with sharp spikes. Once crabs’ shells are broken, their internal organs are violently scrubbed off with stiff-bristled brushes and they’re slowly lowered into boiling water—while they’re still alive and completely aware. Lobsters’ claws and tails are saved—and served to Linda Bean’s patrons—while the rest of their bodies are dumped into bins and left to writhe in agony. 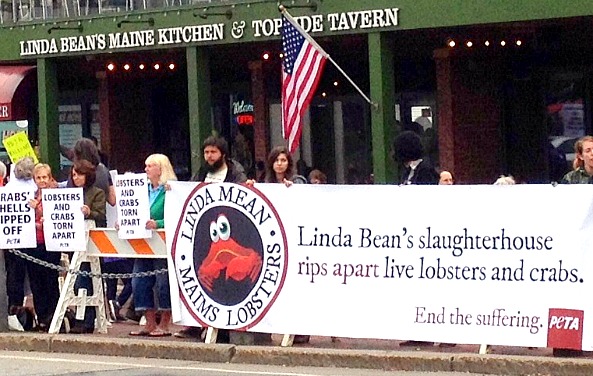 Help PETA spread the word about Linda Bean’s indefensible method of killing animals, which PETA believes violates Maine’s cruelty-to-animals statute. Write to Linda Bean and demand that she switch to a less cruel method of killing the animals whose flesh is sold to add to her fortune.

Of course, the best way that you can save these very misunderstood animals from a painful death is to stop eating them.