A therapy pig at the Turnagain Social Club in Anchorage, Alaska, has been a welcome helper there, and in a letter sent to the senior center, PETA asked that her name be changed from the disrespectful “Bacon” to “Petunia”—or any other pleasing name that’s not associated with the mass slaughter of sensitive pigs—and that she never be eaten or sold or given away to be consumed. 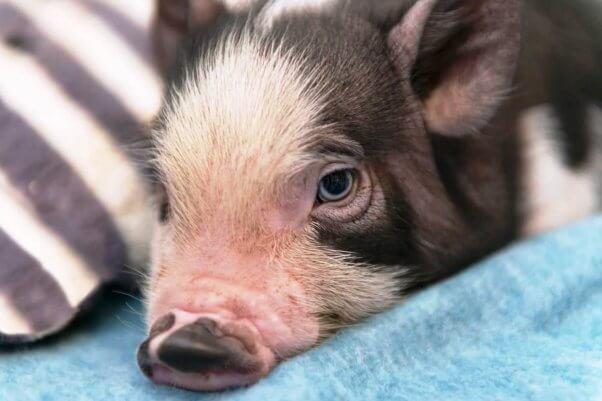 PETA also encouraged the club not to serve any bacon, ham, or other pig-derived meat, noting that vegan meals spare pigs intense confinement in filthy warehouses, the pain experienced when their tails are cut off and their teeth are clipped—often without painkillers—and the terror of being hung upside down and bled to death, sometimes while they’re still conscious. Studies show that vegan meals can also help protect people’s health, as eating meat—especially processed meat—is linked to not only Alzheimer’s disease but also heart disease, cancer, obesity, and diabetes. PETA is offering to provide residents with vegan foods that mimic the taste of pork but skip the suffering.

“The Turnagain Social Club has seen firsthand how good-natured, playful, affectionate, sensitive, and social pigs can be,” says PETA President Ingrid Newkirk. “PETA is encouraging a more loving and respectful name for this beloved therapy pig, as well as a healthy, pig-free lunch menu that spares all ‘Bacons’ immense suffering.”