Although orcas can swim up to 140 miles a day, Lolita, an orca imprisoned at the Miami Seaquarium for the past 50 years, would have to swim the length of her featureless concrete tank approximately 66 times in order to cover just 1 mile. The tank is just four times the length of her body. Under lockdown in the smallest orca tank in the world, she has not been able to dive or swim in any meaningful way since she was torn away from her family and ocean home. She hasn’t been able to socialize with another member of her species since 1980, when her tankmate, Hugo, died after repeatedly ramming his head into a wall. However, you can help end her cruel and senseless captivity. 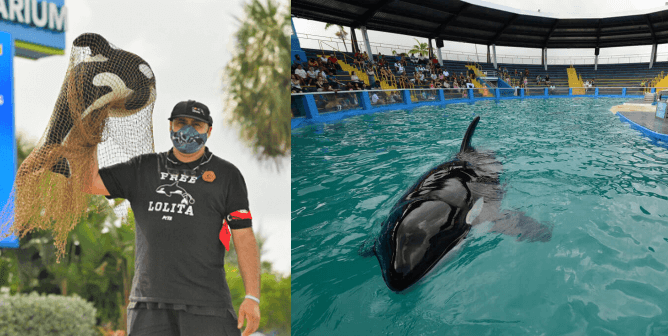 PETA Latino held yet another demonstration outside the Miami Seaquarium to demand Lolita’s release to an appropriate seaside sanctuary. To kick off the event, the group unveiled a massive banner, which members and supporters marched to the facility. The spirited protesters confronted visitors with Lolita’s unbearable living conditions right as the marine animal prison opened for the day. 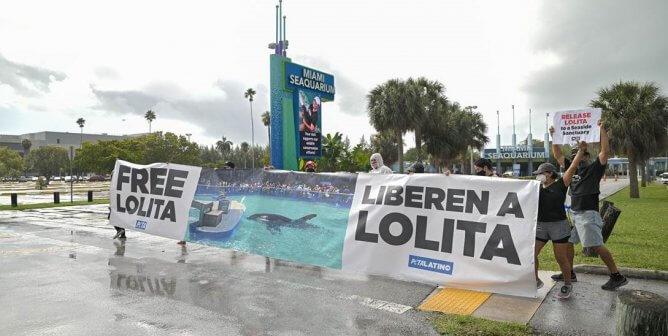 PETA Latino has already gone to the Miami Seaquarium four times in the last year to ask it to end the decades of abuse that Lolita (whose given name is Sk’aliCh’elh-tenaut) has been subjected to and release her into a seaside sanctuary.

If you don’t live close enough to protest the Miami Seaquarium in person, there are still ways to get active.

Start today by sending a message to the Miami Seaquarium’s parent company. It takes only a few seconds, and it will let the company know that the public will not stand by while highly social, intelligent orcas are confined to cramped tanks and forced to perform for human entertainment.

Please call the Miami Seaquarium at 305-361-5705, press 6, and politely urge it to retire Lolita to a seaside sanctuary.

Speak Up for Lolita on the Miami Seaquarium’s Instagram Page

Speak up for Lolita on Miami Seaquarium’s Facebook Page