Do you know which group organized America’s first World Day for Animals in Laboratories protest in 1980? An alert contestant on Jeopardy did. He correctly answered, “What is PETA?” and earned himself $1,000. 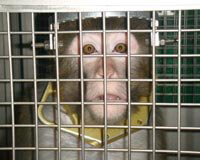 unbelievable @JasonBiggs HILARIOUS and so brave and right on. free shamu!http://t.co/5oQ5MuwyRl

Awesome! I love my Jeem! RT @peta: @ShannonElizab Are you ready 2 LOL? @JasonBiggs stars in the funniest anti-… http://t.co/z2Fktmne4i

Thank you @JasonBiggs for this brilliant and hilarious takedown of @SeaWorld! Must watch! http://t.co/X809Brqcp0

We love Florida, but the one place we have to boycott as a race is @SeaWorld #FreetheOrcas #Blackfish #TheCove pic.twitter.com/LXyybSUc02

Free the prisoners from Sea World! Whales are just as smart, if not smarter than humans. http://t.co/KjRdSfgF6D

Planning to take your kids to @SeaWorld please watch @blackfishmovie before.

Check this video i did with @PETAUK about my thoughts on the movie 'Blackfish'. It's just my opinion: http://t.co/34irV9XiVa

Trying to reply to everyone! Sorry if I dont 🙁 Take your anger out on SeaWorld if you need to, makes me feel better! pic.twitter.com/WTQHMVsE20

@RobertRasha I really liked it, but F sea world.