The View has been in the news a lot lately, with the addition of Whoopi Goldberg to the show. But yesterday, the show was in the news for a different reason. One of the hosts, Elisabeth Hasselbeck, revealed what she thought was the “funny” news that she has decapitated a chicken. She even demonstrated with hand motions how to do it “correctly,” horrifying the audience and co-hosts Joy Behar and Barbara Walters even more than she usually does.

Here’s a video of the incident. 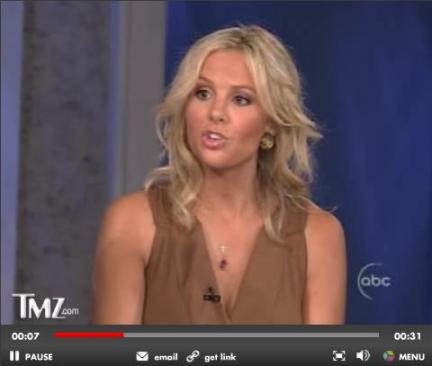 And here’s what a PETA rep told TMZ about it:

“PETA has two words for Hasselbeck, ‘Cluck you!’ Next to Barbara and Joy, who expressed compassion, Elisabeth sat there chirping about the joys of killing defenseless birds. Conservatives love animals too, and she ruffled a lot of feathers today. Now that Whoopi has joined the show, maybe it’s time for Hasslebeck’s head to go on the chopping block.”