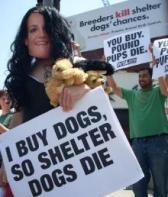 Yesterday in Los Angeles, Paris and Britney look-a-likes took to the streets to lead a hilarious protest against pet stores and breeders at the site of our new ABC (Animal Birth Control) billboard. Obviously, this protest was meant to be lighthearted and fun, but the issue is deadly serious for the animals involved. For every dog or cat purchased from a breeder or a pet store, another dog or cat on death row at an animal shelter must be killed. Here’s what PETA’s Director of Domestic Animal Issues had to say about it all, “Forget jail or rehab; these selfish stars should do a stint in an animal shelter, where they would witness the plight of dogs who end up there after being bought on an impulse.”