Here’s something that you might not know about PETA: We hold stock in companies whose policies we’re trying to change so that we can attend annual meetings and propose shareholder resolutions to try to push companies to stop cruel practices. McDonald’s had one such meeting today, so, of course, we were there with bells on.

PETA campaigner Tracy Patton stood up and asked McDonald’s executives why they continue to allow their suppliers to use an archaic slaughter method that includes slicing chickens’ throats while they’re still conscious and scalding them to death in defeathering tanks. She explained to the group of shareholders that an improved slaughter method called “controlled-atmosphere killing” (CAK) would eliminate the worst abuses of chickens and is already used by McDonald’s suppliers in Europe and by other companies in the U.S.

The McDonald’s execs hemmed and hawed and made excuses, but they and the shareholders got the message that PETA isn’t going to let McDonald’s cruel slaughter of hundreds of millions of chickens each year be swept under the rug. 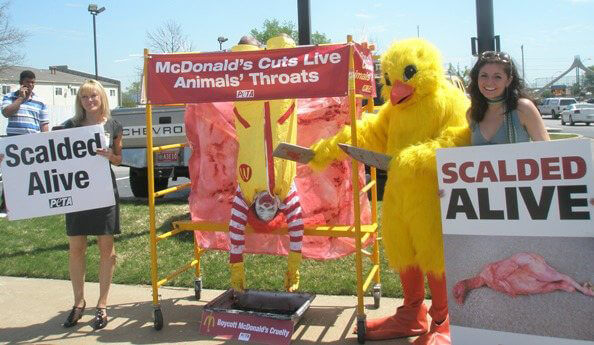 Make sure that McDonald’s gets the message from you, too. E-mail President Don Thompson, and demand that the chain switch to CAK.