As National Guard troops arrive at the U.S.-Mexico border—after President Trump ordered their deployment last month in an effort to keep out asylum seekers—PETA is warning people about the presence of the real “undesirables” much closer to home. We have placed a billboard featuring trophy hunter Donald Trump Jr. in the border towns of El Paso and Laredo, Texas. He’s seen posing with a knife and the hacked-off tail of an elephant he shot in someone else’s country. Next to the photo are the words “¡Deporten a oportunistas crueles y tramposos ya! Todos los países tienen indeseables. La compasión es bienvenida,” which translates as “Deport cruel, cheating opportunists now! All countries have undesirables. Compassion is welcome.” 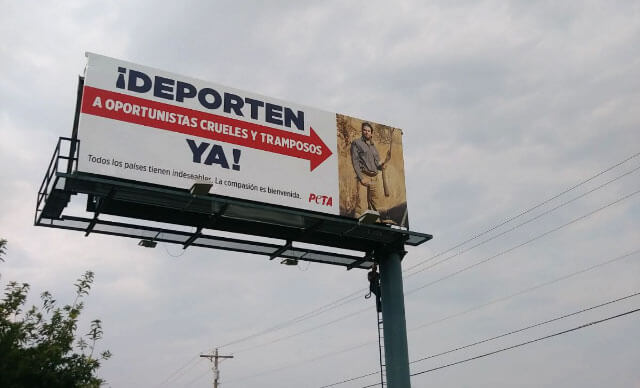 While people are fleeing to the U.S. to escape violence, overprivileged, callous, cheating louts like Donald Trump Jr. are flying overseas to gun down living, feeling beings just for fun. PETA’s border ad is a reminder that kindness is a virtue and that the true “bad hombres” are those killing animals for some sort of pathetic “sport.”

VIOLENT, CRUEL, UNFAITHFUL, OPPORTUNISTIC. Factual description of this Undesirable who travels to foreign countries to shoot wildlife in cold blood in a pathetic display of “white Bwana complex” male insecurity. One day he’ll get his come-uppance. pic.twitter.com/uKHQM0EQ8x

Hunters kill millions of animals every year and have contributed to the extinction of species all over the world, including the Tasmanian tiger and the great auk. Unlike natural predators, who kill primarily sick and weak individuals, trophy hunters specifically seek out large, healthy animals who are needed to keep populations strong. Numerous animals are injured but not killed by hunters, escaping only to die slowly and painfully from blood loss and starvation. Cecil the lion, for example, was shot with a steel arrow and left to suffer for 40 hours before he was finally killed by an American dentist.

UPDATE: New information reveals that lion-killer dentist Walter Palmer caused Cecil to suffer for up to 12 hours. This shows how backward and cruel it is for the U.S. to reopen its borders to "trophies" of body parts of imperiled lions and elephants. https://t.co/oLd7jaYE9D

Trump Jr. has a history of self-aggrandizement at the expense of wildlife in the U.S. and abroad. In 2012, he and his brother Eric hunted and killed numerous animals in Africa—including an elephant. In response, PETA released the following statement:

If the young Trumps are looking for a thrill, perhaps they should consider skydiving, bungee jumping, or even following in their anti-hunting father’s footsteps and taking down competing businesses—not wild animals.

PETA is known for its stance against all violence. In March, it has displayed a banner outside its D.C. office calling for a ban on assault weapons, in solidarity with the students in Parkland, Florida.

Some people who SUPPORT assault weapons are excited that out of millions of PETA supporters one person did something awful. For the record, PETA’s position is clear from this banner we’ve displayed outside our DC office for a month, in solidarity with the Parkland students. pic.twitter.com/B90QEK5O4n

Its other provocative anti-hunting campaigns have included sending Huntsman Condoms to hunters around the world, including Trump Jr. and his brother Eric, to encourage them to stop reproducing.

Join us—stand against those who promote or perpetuate violence against any living beings.

PETA supporters also marched in solidarity with and in support of all the victims of gun violence at March for Our Lives events across the country earlier this spring.

This was one of the @PETA shirts our members wore at the #MarchforOurLives from Florida to DC to Los Angeles. Why does anyone feel threatened that many people want an end to ALL violence? Go #vegan and save some lives today, right away! pic.twitter.com/C8qdQAnEZP

Many wore PETA T-shirts with the slogan “Vegans Against All Violence,” and you can, too. Click the button below to order yours today:

Get Your ‘Vegans Against All Violence’ T-Shirt

We’re calling on UPS to ban the shipment of hunting trophies, and you can take action, too. By urging UPS to end the transport of animals’ bodies today, you’ll help to protect the many sentient beings who could be tragically killed by trophy hunters. Take action now: