PETA protesters wearing monkey masks and holding signs reading, “Deplane Monkeys,” recently held demonstrations outside the Chicago headquarters of United Airlines and the U.S. headquarters of Air France in New York. PETA is urging the airlines to commit to a ban on shipping primates to laboratories, as almost every airline in the world already has, including Delta, American, US Air, and China Airlines. 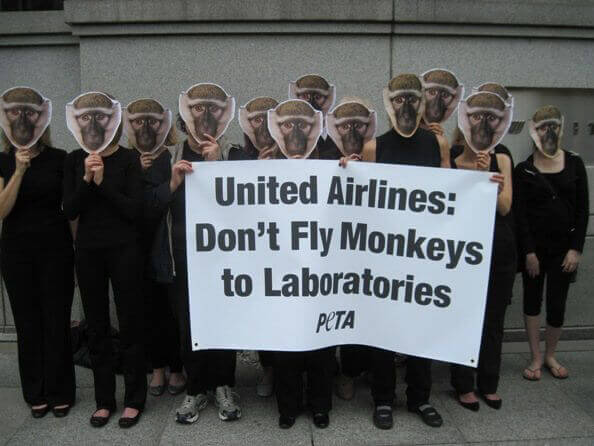 PETA demonstrators also dropped a banner from a busy overpass next to United HQ, generating a lot of views and picture-taking: 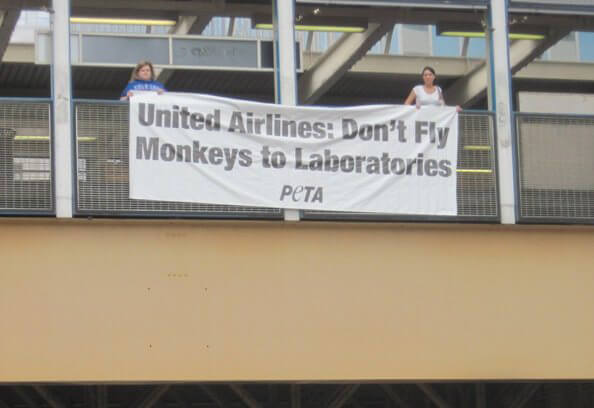 United Airlines, which recently acquired Continental Airlines, is now the last U.S. air carrier without a policy prohibiting the transportation of primates to be abused and killed in crude, painful, and archaic experiments in laboratories.

The cruelty involved in laboratory experiments on primates and other animals should be self-evident: After hearing from PETA about the horrors that cats and dogs endure in labs, for instance, Nippon Cargo Airlines, which had been shipping dogs and cats from the United States to Japanese labs, implemented a worldwide policy against shipping any animals to labs.

Help Stop Primates From Being Shipped to Laboratories

Please join PETA in telling airlines that still transport monkeys to U.S. laboratories to adopt a policy against the transportation of nonhuman primates for use in experiments.