This week, an eye-opening new PETA ad slamming the National Institute of Mental Health (NIMH) will debut in major D.C.-area outlets such as The Hill and Roll Call. A similar new PETA ad will also run in The Washington Times. The ads let D.C.-area readers know about the shockingly cruel junk science psychological experiments on animals being performed by NIMH, which aren’t applicable to humans, squander taxpayer funds, and waste lives. Check out one version of the new ad below: 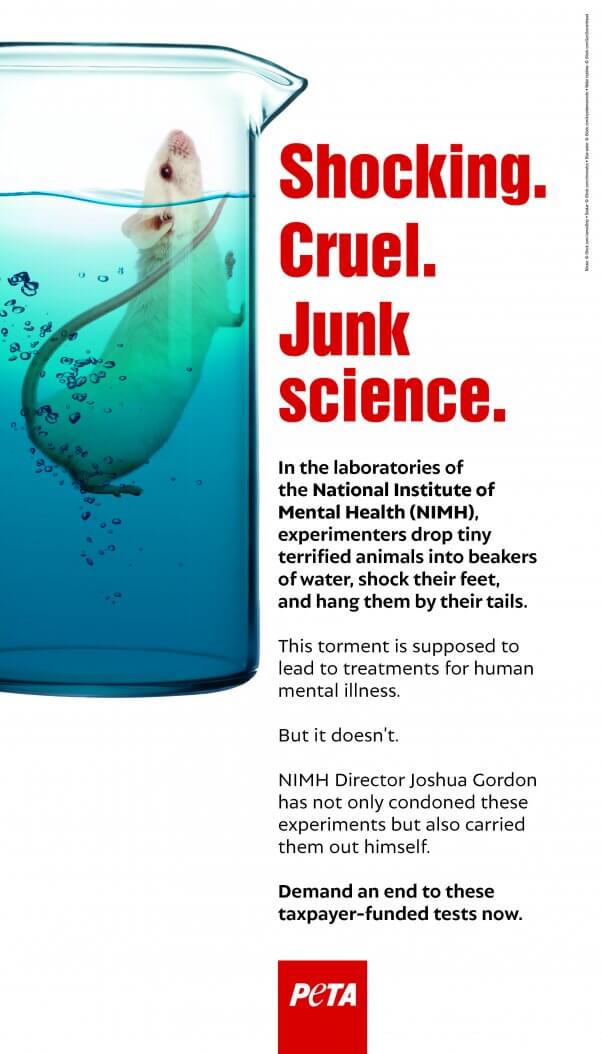 In the widely discredited forced swim (or “despair”) test, mice, rats, or other small animals are placed in inescapable beakers filled with water and must swim frantically to keep from drowning. In the tail suspension test, mice are hung upside down by their tails, which are taped to a bar. In the foot shock test, mice or rats are locked inside a chamber that has an electrified grid floor and shocked.

A groundbreaking new NIMH-funded study published in the leading scientific journal Nature makes clear that the practice of using of mice (and, indeed, other animals) in cruel depression experiments is unreliable and must end. In the study, 64 researchers analyzed the brains of mice and humans and found substantial species differences in types of brain cells and the ways they produce proteins critical to neuropsychiatric function. The authors noted numerous “failures in the use of [the] mouse for preclinical studies” because of “so many [species] differences in the cellular patterning of genes.”

“Nearly drowning, electrically shocking, and crudely suspending mice upside down is junk science that teaches us nothing about human depression. PETA is calling on NIMH to stop misusing taxpayer dollars on these hideous animal experiments, which experts agree are less accurate than a coin toss in assessing antidepressant medications.”

In response to PETA’s pressure on the agency to drop these twisted psychological torture tests on animals, NIMH Director Joshua Gordon told Nature, “The National Institute of Mental Health has for some time been discouraging the use of certain behavioral assays, including the forced swim and tail suspension test, as models of depression.” He added, “[T]hese tests in particular are recognized by many scientists as lacking sufficient mechanistic specificity to be of general use in clarifying the neurobiological mechanisms underlying human depression.” 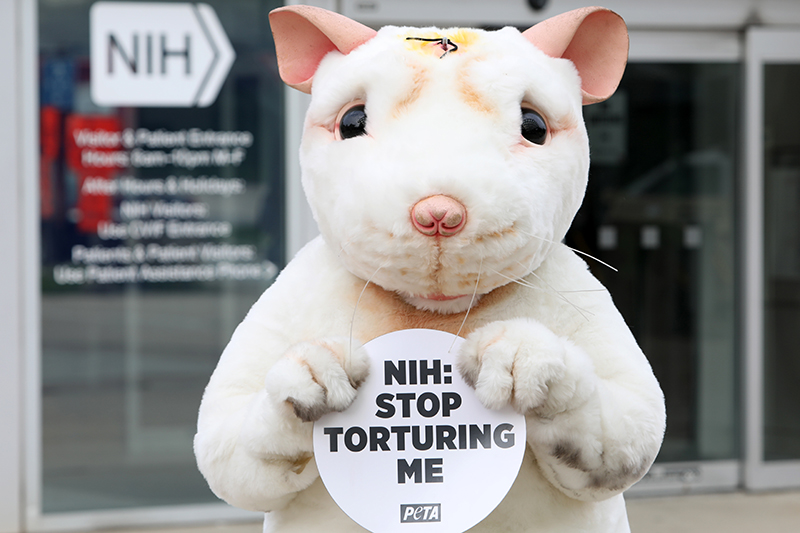 Thousands of PETA supporters along with U.S. Rep. Brendan Boyle are pressing NIMH’s Gordon to end all use of animals in taxpayer-funded experiments and to use superior, human-relevant, non-animal research methods to address the nation’s mental health crisis instead. You can join them. Click on the link below to take action for animals used in experiments now.