“I’m an Individual, Not a Test Tube.” That’s the message to the National Institutes of Health (NIH) on a new PETA ad that people can see all around the agency’s hometown of Bethesda, Maryland. 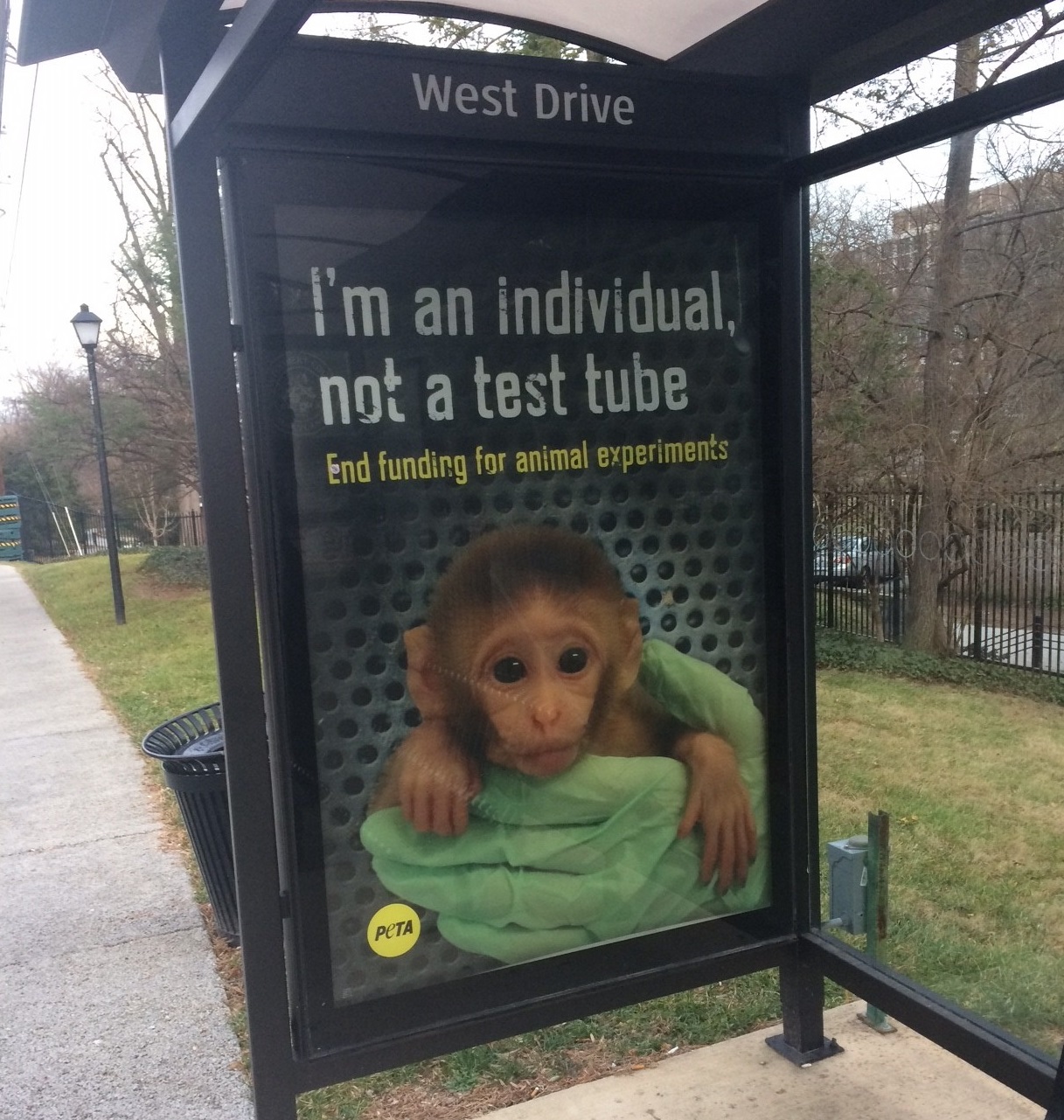 The baby monkey featured in PETA’s ad was used in abusive experiments in which infants were separated from their mothers at an NIH facility in Maryland. These experiments ended after a dedicated PETA campaign against them.

Although PETA was able to help put an end to these experiments, NIH continues to conduct and fund animal experiments in laboratories across the United States. The ad calls on it to stop supporting this cruelty and to recognize that animals are living, feeling beings, not objects.

The suffering that NIH funds every day in laboratories across the country would give most people nightmares.

Recent NIH-funded studies include $2 million experiments at the University of Delaware in which newborn rats were taken away from their mothers, subjected to electric shocks, and force-fed alcohol. Experimenters at Johns Hopkins University used NIH funds to cut into monkeys’ skulls in order to expose part of their brains and cover them with a metal plate. The experimenters then coerced two rhesus monkeys into using a computer game in which they “gambled” for drops of juice.

Like all sentient beings, animals value their own lives and want to avoid suffering. Up until the moment that they’re gassed, mutilated, injected with dangerous chemicals, shocked, burned, and ultimately killed, these individuals do their best to escape torment and an untimely death.

Each year, NIH doles out an estimated $18 billion—approximately 47 percent of its budget—for animal experiments. But multiple peer-reviewed studies have shown that they aren’t leading to cures or treatments for humans. According to one analysis, 90 percent of basic animal studies fail to lead to human therapies. At least 95 percent of new drugs that test safe and effective in animals fail when tested on volunteers in human clinical trials. As a result, animals suffer and humans are denied effective treatments for Alzheimer’s disease, sepsis, spinal-cord injuries, traumatic brain injuries, Parkinson’s disease, and other health problems.

Demand that NIH get back to its original mission of enhancing health and seeking useful knowledge.

PETA is calling on NIH not to squander more tax dollars on cruel, failed experimentation that kills millions of animals and instead redirect funds to modern, non-animal research methods.

Ask your congressional representatives to support efforts to curb the waste of taxpayer dollars at NIH and insist that the agency award its grant money to effective non-animal research:

Cut Funding for Experiments on Animals