When Russia banned the import of all harp-seal products from Canada, it wasn’t because lawmakers thought that they would get flowers from Pamela Anderson if they did so. But that’s certainly not a bad perk. 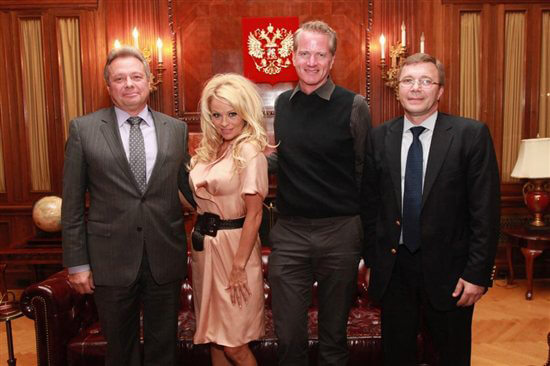 Pamela found herself in a new role as diplomat this week when she joined PETA Vice President Dan Mathews at the Russian Consulate in New York City, where they met with trade officials to bolster Russia’s ban on seal fur from Pamela’s native Canada.

“We are very proud that our country joined the U.S., the European Union, and Mexico in refusing to support the shooting and bludgeoning of baby harp seals,” said Russia’s Deputy Trade Representative Timofey S. Borodin, who along with Senior Consul Sergey Logachev, accepted a bouquet of pink roses from Pamela as thanks for their country’s legislation. 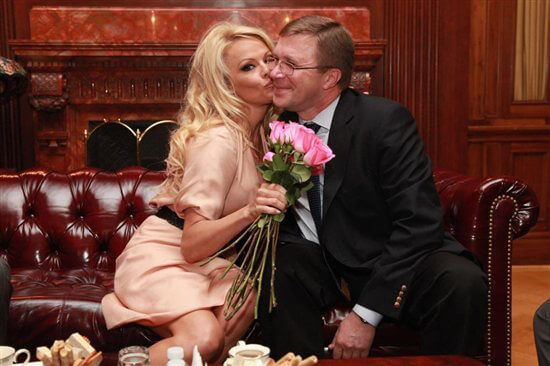 Pamela had led an international appeal on PETA’s behalf to urge the country to stop supporting the barbaric killing of seals in her native Canada, and it took just one year for Russia to pass the ban. And since Russia had been importing 95 percent of the seal pelts that Canada sold, well, it isn’t hard to see what that did to the market for seal fur.

The slaughter suffered another blow when Canadian Sen. Mac Harb introduced legislation to end it. You can help seals by e-mailing Canadian lawmakers and asking them to support this momentous bill.