This morning, PETA’s Policy Department received a Scrooge-like phone call from someone purporting to be from Gov. Sarah Palin’s office threatening legal action against us if we don’t play ball—or, actually, stop playing ball. Why are Ms. Palin’s peeps so mad at PETA? Well, if you’ve played our Holiday Snowball Fight game recently, you may know. The game asks players to pick up a virtual snowball and take aim at 2008’s biggest animal foes, from Colonel Sanders to the Trollsen twins to Alaska’s own Sarah Palin. But guess what, Sarah? We’ve checked with our legal team, and they say that it’s “protected parody,” or “fair game”—so the game stays! After all, we’re throwing snowballs, not shoes.

In real life, the moose and other animals Ms. Palin blows to smithereens don’t stand a chance. But, hey, our game is virtual and nonviolent. To be honest, I’m not quite sure why Sarah is so mad about the game anyways. Wielding a gun and decked out in a sexy bikini and pageant ribbon, I’d think she’d be quite proud of how PETA’s portrayed her.

Though this game is just a bit of harmless payback, Palin’s real-life hunting habit is no joke. Palin not only guns down big moose but also supports aerial hunting of wolves—she even proposed putting a bounty of $150 on their heads. Wolves aren’t even overpopulated in Alaska. The sole reason for the bounty would be to boost the numbers of moose and elk so that hunters will have more living targets for their blood sport. Pathetic. 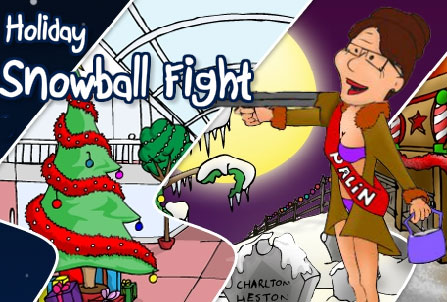 P.S. Governor Palin isn’t the only fantastic figure in the game, so if you haven’t had the chance to play, check it out!