PETA staffer Erin Vader’s mom was visiting her father-in-law at a nursing home on a Sunday afternoon in Livonia, Michigan, when she overheard worried staffers talking about a flock of ducklings who were living in the nursing home’s courtyard and whose mother had not been seen all day. She called PETA’s emergency pager for advice and was advised to wait a little longer to see whether Mama Duck would return.

In the meantime, she asked the nursing home staff to put out a pan of water for the ducklings, which the eight youngsters slurped down in a matter of minutes, followed immediately by a second pan of water. The staffers kept the ducklings supplied with fresh water until it became obvious that Mom wasn’t coming back. 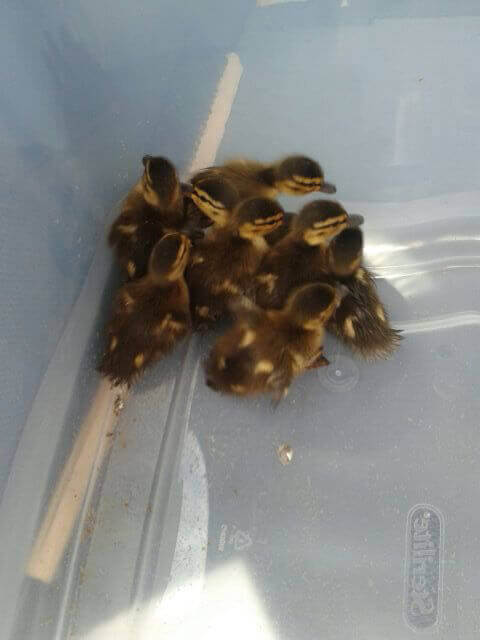 By that time, Erin had contacted a local licensed wildlife rehabilitator who specializes in ducks and had agreed to take all eight orphans. When Erin arrived at the nursing home to collect the ducklings, the grateful staffers even helped her round up the energetic youngsters and get them into a carrier for transport to the rehabilitator’s rural property about an hour away.

Thanks to the nursing home staff’s watering diligence (they are professional caregivers, after all), the ducklings, while hungry, were not dehydrated and appeared to be in good health. Once they are old enough to survive on their own, the ducks will be released into a suitable habitat.

Most wildlife babies are OK—they are either fledglings or their parents are temporarily away, foraging for food. But if you suspect that an animal is sick, injured, or orphaned, contact your local humane society, which should have a list of licensed rehabilitators in your area. If you need further assistance or advice, contact PETA, anytime, day or night, at 757-622-PETA