Following last week’s killing of dozens of wild animals in Zanesville, Ohio, PETA supporters gathered in front of the Ohio statehouse today calling on Gov. John Kasich to ban ownership of wild animals as “pets” immediately, before other tragedies occur. Earlier this year, the governor refused to extend an emergency ban on keeping captive exotic animals that had been put in place by his predecessor. 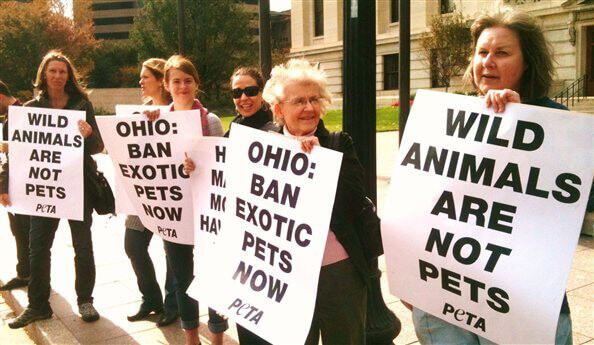 In a letter to Gov. Kasich, PETA noted that there are at least 10 wild-animal facilities in Ohio that are accidents waiting to happen. One facility in Massillon that holds more than 100 animals—including tigers, lions, pumas, jaguars, bears, and wolves—was found this year to be keeping tigers in an enclosure that had no top and was not tall enough to keep the animals contained. Another facility, in Perrysburg, was found to be keeping adult lions and wolves in enclosures that would not prevent them from jumping out.