One thing wasn’t up for debate last night—PETA’s “elephant” turned almost as many heads at the presidential debate as the motorcades did. 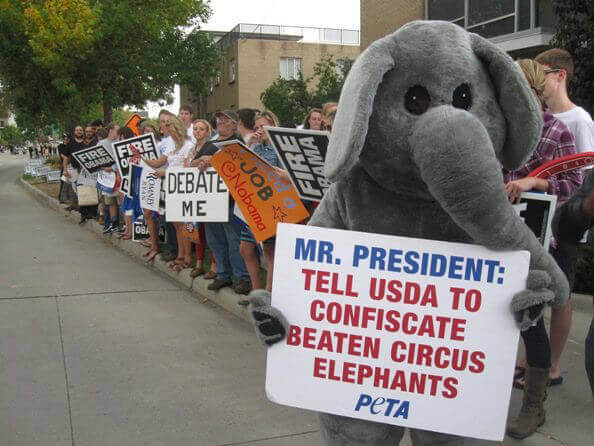 President Barack Obama read the elephant’s sign and responded with a wave. Mitt Romney likely got the message, too, as he passed by twice. Fox News pundit Juan Williams took our circus leaflet and read over it. And Rudy Giuliani and Tom Brokaw checked us out. In addition, many of the 5,000 members of the media who were there wanted to interview us and take the elephant’s picture.

While our elephant’s species might seem to suggest that she belongs to the GOP, the only party she’s concerned with is the one she’ll throw when circuses are no longer allowed to imprison and beat elephants. Help make it a reality for her—go only to circuses that don’t use animals.

PETA is dedicated to stopping the abuse of animals and promoting healthy vegan eating. We take no position in support of or opposition to any political party or candidate for public office.