For two horses on the new HBO series Luck—which is set in and around the horse-racing industry—it was only bad luck. While filming the show’s pilot, a horse suffered a severe fracture after falling during a race sequence and was euthanized. Another horse was killed while filming a later episode. Two horses died for a couple of hours of television! PETA repeatedly reached out to series creator David Milch and others associated with the HBO production before shooting began, but our efforts were rebuffed. 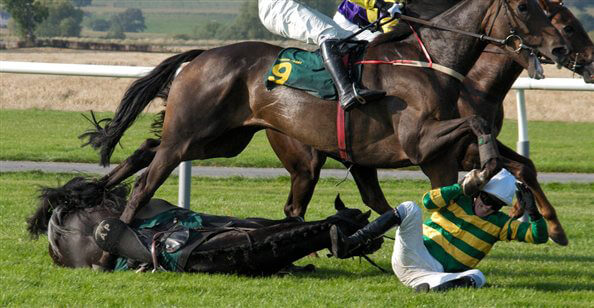 Behind the romanticized façade of thoroughbred horse racing is a world of injuries,
drug abuse, gruesome breakdowns, and slaughter. Image:Paolo Camera | cc by 2.0

Perhaps if producers had considered the proved safety protocols that we would have suggested, these horses would still be alive. The show’s theme is showcasing the dark side of racing, and while it does acknowledge how many thoroughbreds suffer catastrophic breakdowns and how horses are routinely doped, two dead horses in a handful of episodes exemplify the dark side of using animals in television, movies, and ads.

We refrained from telling the show’s producers “we tried to tell you so” and are now in discussions with HBO about how to prevent even more deaths on the show.