After learning that CareerBuilder is once again using baby chimpanzees in a Super Bowl ad, Anjelica Huston has teamed up with PETA to urge the company’s CEO, Matt Ferguson, to stop using chimpanzees in its commercials—unless they are created using cutting-edge computer animation, like the conscientious folks behind Pfizer’s Robitussin “orangutan” ads and the movie Rise of the Planet of the Apes have done, saving animals from being taken away from their families, cruelly trained, and then abandoned when they can no longer be controlled. 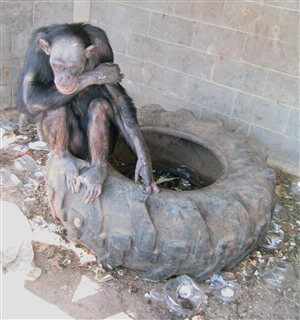 Anjelica—soon to be seen in NBC’s Smash—has been a strong supporter of PETA’s campaigns to end the use of chimpanzees and other great apes who are forced to work as “performers” in films and on television. In her letter, the Oscar-winning actor, well, smashes CareerBuilder’s excuses, pointing out that monitoring on-set action doesn’t prevent the cruelty that happens before and after the ad is shot, as described in the video Anjelica narrated for PETA on the subject.

As Anjelica’s letter to Ferguson states, “It is astonishing that you are unmoved by the videos, photographs, and case reports of what befalls these animals from the moment they are taken from their mothers to the moment they die.” Let’s hope he finally gets the message and that this will be the last year that the big game will be interrupted by images of real baby chimpanzees performing stupid tricks in a sad attempt to appeal to clueless job-seekers.