In a cheap and desperate attempt to dismiss PETA’s exposure of horrific and useless experiments on monkeys and other animals at the National Institute of Mental Health (NIMH), Director Joshua Gordon has accused anyone who criticizes these experiments of stigmatizing humans with mental illnesses. Nothing could be further from the truth. As a psychiatrist, Gordon should understand the meaning of “projection”—it is Gordon himself who is ignoring the science and using humans with mental illness as his excuse to support unethical, unscientific behavior.

Here are the facts:

The World Health Organization estimates that around 400 million people worldwide are living with mental illnesses. For too many of them, the currently available treatments are inadequate. Despite receiving billions of dollars of taxpayer money, NIMH continues to fail to develop new treatments for individuals suffering with mental illness. Why? Because Gordon and NIMH refuse to abandon outdated and ineffective animal “models” of human mental illness.

A growing number of mental health experts agree that the billions of federal dollars and countless hours that have been spent on experiments on animals are hindering progress in treating mental health conditions. In an editorial in The British Journal of Psychiatry, former advisors to NIMH called out the institute for allocating astonishingly little support (only 15% of the budget in 2012) for services and interventions that would directly help humans living with mental illness, such as “developing sustainable interventions to overcome disparities in access to effective treatment and outcomes; crafting technologies and implementation strategies to disseminate scalable, cost-efficient interventions; devising approaches to empower people to overcome barriers to engagement and retention in treatment; and deploying preventive interventions to reduce the burden of mental illness, including clarifying how to implement best practices in suicide prevention.”

Two former NIMH Directors have spoken out since leaving the institute:

The newly discovered antidepressants, antipsychotic drugs, and benzodiazepines were used to develop animal-based screens, with the goal of identifying new drug candidates. It was recognized that screens based on existing drugs might fail to identify new therapeutic mechanisms, and unfortunately this risk has been fully borne out …. More troubling, these screens occasionally became imposters for disease models in the academic literature as well as in industry, despite scant corroborative evidence. In the widely used forced-swim and tail-suspension tests, for example, a compound is considered to be an antidepressant when, compared with a control, it causes a rat or mouse to continue swimming or actively struggling longer. Forced-swim and tail-suspension tests do not even model the therapeutic action of antidepressants, because in these rodent screens, a single dose of antidepressant is active, whereas in depressed patients, antidepressant drugs require weeks of administration to exert a therapeutic effect.

I spent 13 years at NIMH really pushing on the neuroscience and genetics of mental disorders, and when I look back on that I realize that while I think I succeeded at getting lots of really cool papers published by cool scientists at fairly large costs—I think $20 billion—I don’t think we moved the needle in reducing suicide, reducing hospitalizations, improving recovery for the tens of millions of people who have mental illness. I hold myself accountable for that.

[A] common reason for failure is the lack of animal models that have predictive validity (predicting human efficacy) despite having some degree, perhaps even a high degree, of face validity (recreating the disease phenotype or being mechanistically related to the disease). This is probably the most frequently referenced reason for the failure of CNS [central nervous system] drugs in the clinic. Whether the failure results from an inadequate disease model or from poor translation of model results into clinical study design, this is a key, perhaps even marquee, problem in CNS translational research. [Emphasis added.]

This is deeply troubling. Human patients are being deprived of services and interventions, and few companies are interested in developing new therapies to improve the quality of—and potentially save—their lives.

Mental illness experiments on animals are flawed by design. New therapeutics are being made to target increasingly specific molecular pathways in the brain, and—while other animals experience emotions and needs just the same as humans do—these fine points are where we differ the most and where it matters the most when it comes to treatments.

In addition to the lack of applicability of animal neuropsychiatric “models” to the human condition, animals used in this research suffer immensely. To induce “depression,” experimenters subject them to uncontrollable pain through electric shocks or chronic stressors, such as restraining them for extended periods of time, starving them or denying them water, tilting their cages, forcing them to live in wet bedding, shaking them, or disrupting their circadian rhythms. Animals are often made to live in complete isolation from members of their own species, bullied and physically assaulted by other animals, deprived of parental care, and subjected to genetic or surgical manipulations in an effort to induce a depressed or altered mental state.

Rather than making the actual changes needed to help people with mental illness, NIMH has simply decided to ignore the concerns of scientists and animal advocates alike. It continues to use the taxpayer dollars that it receives for mental-health research to inflict brain damage on monkeys and scare them with rubber snakes and spiders, hang mice upside down by their sensitive tails or force them to swim for fear of drowning, and shock animals’ feet while they’re trapped in a cage from which they cannot escape.

PETA opposes all forms of exploitation: ableism, ageism, classism, homophobia, racism, sexism, speciesism, transphobia, and xenophobia. We are a collection of individuals who, like the majority of the human population, have cared for loved ones living with mental illnesses or have lived with them ourselves. Our commitment to justice for all is why we—along with experts in the field—reject Gordon’s false claim that crude experiments on animals are essential for finding treatments for these conditions.

Gordon defends pointless animal experimentation because facing reality would throw a wrench in his life’s work, which includes subjecting animals to electric shocks, depriving them of food and water, and more in efforts to study human mental health. For a paper he published shortly after he became the director of NIMH, the tails and vaginas of young female mice were rubbed with male mouse urine and the animals were placed in cages with larger, aggressive male mice so that they would be assaulted. They were co-housed with their assailant—separated only by a divider—for the remainder of that day. They encountered a new attacker every day for 10 days.

As PETA has made abundantly clear in multiple communications to Gordon and his colleagues, our concerns are based on the continued funding of a monkey brain damage project that has gone on for more than three decades, has cost NIMH tens of millions of dollars, and has inflicted considerable pain and suffering, including profound psychological distress, on hundreds of monkeys—but has not had any meaningful impact on the lives of individuals with mental illness. 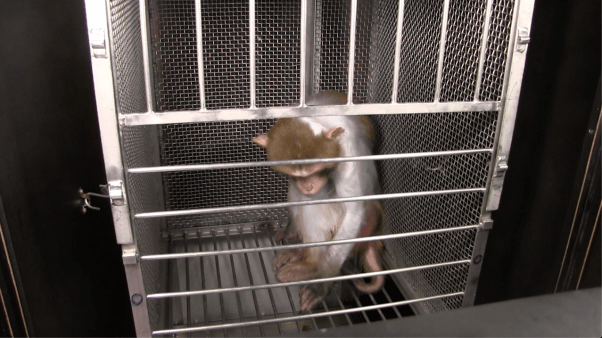 We would not experiment on humans who, because of their level of cognitive ability or the presence of a particular mental illness, could not consent to be experimented on. It’s speciesist not to apply this principle to other animals as well. Anyone who claims to care about the experience of humans living with mental illnesses should, for the same reason, object to the deliberate creation of the same or similar suffering in other animals.

Please urge Gordon to end NIMH’s cruel and worthless experiments on animals in favor of research that might actually help the millions of humans suffering with mental illness.