This week, the NFL is running a campaign called “My Cause My Cleats,” in which players are allowed (and encouraged) to wear custom cleats during their games in support of a charitable crusade of their choosing. Players selected everything from fighting hunger to stopping domestic violence. Of all the important messages, though, one player’s custom cleats stood out to us above the rest: Dallas Cowboys’ star running back, Ezekiel “Zeke” Elliott, used the opportunity to honor his best friend—his dog, Ace—and spread messages in support of animal adoption and against animal abuse.

As if that didn’t make us love him enough, he also puts his money where his mouth is! Beyond the very public custom cleats for the NFL’s campaign, he has supported local shelters and often promotes adoption.

We can all help end animal homelessness by adopting animals from our local shelters, never buying them from pet stores or breeders, and being sure to stop animal overpopulation in its tracks by spaying and neutering.

Has Zeke’s big heart inspired you? 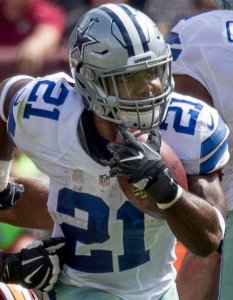