An international PETA video exposé of the wool industry in 2014 revealed that shearers beat gentle sheep and jabbed them in the face with objects like electric clippers and a hammer. And now, a shocking new ad is shining light on yet another corner of the dark underbelly of the wool trade: 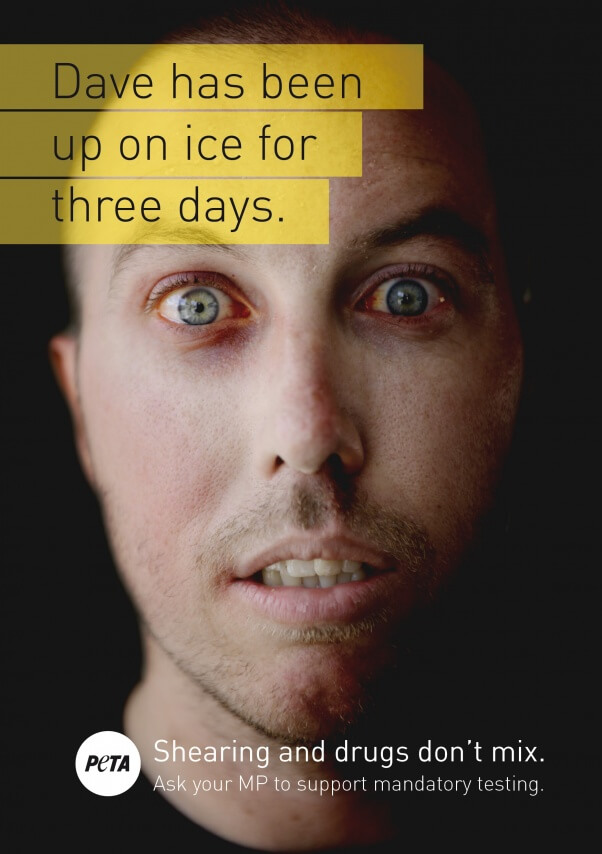 The ad, which features the gaunt face of a man beside the words “Dave has been up on ice for three days: Shearing and drugs don’t mix,” is part of a PETA Australia Facebook campaign specifically targeting farmers. The goal? To encourage both farmers and lawmakers to take heed of the risks to animal welfare and human health when drug use by wool industry workers goes unchecked.

The South Australian Liberal Party delegate and wool producer Robert Lawrence has stated that drug use is one of the “top three issues facing the wool industry” and notes that one shearer “[broke] 14 legs [of sheep] during two days’ shearing.” His fellow delegates agreed, calling for mandatory drug testing.

By refusing to address this issue, the government is facilitating the suffering of sensitive, gentle animals. When workers shear sheep under the influence of drugs, human health is at risk and animals can be injured or even die. This is why PETA Australia is calling on lawmakers to address the issue now and support the introduction of mandatory drug testing for shearers.

Do your part and leave wool where it belongs: on sheep.

If you love animals and are shocked to learn this, you can do something about it! The best thing that you can do for sheep all over the world is to stop wearing clothing made from their body parts. Fashionable, cruelty-free vegan alternatives, such as synthetic fleece and cotton blends, are easy to find, and they won’t weigh down your conscience.

Learn how to wear vegan now!