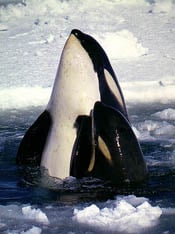 Wild animals are dying because of human avarice, but unlike the plight of those who are perishing in oil, the carnage at SeaWorld can easily be stopped. An orca named Taima died this weekend while giving birth to a stillborn calf at SeaWorld Orlando. The baby was conceived by Tilikum, the angry and frustrated orca who battered a trainer to death earlier this year—the third time he has killed a human.

For Taima, death was terrifying and painful, but it was a release from a miserable life of deprivation. In nature, orcas choose their own mates, and the families stay together for life. Ripped from her ocean home, Taima’s own mother, Gudrun, died in captivity after a complicated delivery in which chains were used to extract her stillborn calf. Gudrun was called mentally ill and was known to be violent. Both mother orcas and their calves met their end alone in a tank full of chemically-treated water that must have felt like a bathtub to these animals, who were meant to explore the endless fathoms of the sea.

SeaWorld is a greedy outfit that spends millions of dollars on cruel breeding programs and marketing promotions. It values profit over safety and treats orcas as if they were wind-up toys. Like BP, SeaWorld can never make up for the harm that it has done. It should immediately fund the creation of a coastal sanctuary into which the orcas can start their journey back home. It can start with Tilikum.

Urge SeaWorld to stop breeding dolphins and whales and send them to seaside sanctuaries: