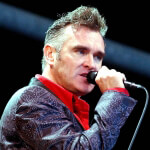 Morrissey—a music icon, an animal activist, and a newly minted bestselling author—has once again given the masses food for thought with his latest provocative proclamation. In a recent Q&A with fans on True to You, the musician compared meat-eating to pedophilia and murder: “I see no difference between eating animals and pedophilia. They are both rape, violence, murder,” he wrote. “Imagine, for example, if you were in a nightclub and someone said to you, ‘Hello, I enjoy bloodshed, throat-slitting and the destruction of life.’ Well, I doubt if you’d want to exchange phone numbers.”

“I would like to ask all so-called celebrity chefs why they believe that animals should have no right to live,” he declared. “If Jamie ‘Orrible is so certain that flesh-food is tasty then why doesn’t he stick one of his children in a microwave? It would taste the same as cooked lamb.”

Not surprisingly, Morrissey’s comments have generated worldwide attention and have prompted people to consider the painful parallels between the abuse of humans and the abuse of animals. And Morrissey puts his money where his mouth is: He just raised $13,500 for PETA by auctioning off a signed hardback edition of his sensational new memoir, Autobiography.