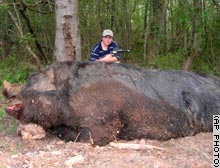 I’ve been refraining from touching this story for a while now, partially because I didn’t want to give any publicity to a lousy father who thinks that killing animals on the weekend is a good way to teach his son to be a productive member of society. But the latest twist in the sad tale of “monster pig” seems at least worth a mention. For those of you who missed it, some kid in Alabama shot a 1,000 pound wild hog, and the picture of his senseless act went pretty much everywhere on the Internet because, well, it really was a surprisingly large animal. As it turns out, though, far from being a wild “monster pig,” as he came to be known, Fred was actually a companion animal who had been raised from birth by a couple named Phil and Rhonda Blissitt. Don’t feel too sorry for the Blissitts, since they saw fit to sell their pet to a hunting preserve for some reason, but I do think this latest development adds a certain poignancy to Fred’s already sad story. Hopefully it will be harder for people to take pleasure in this animal’s suffering now that they know he had a name.