Update: The California Healthy Pets Act has passed the Assembly, and is on its way to the State Senate Committee! Thanks to everyone who worked so hard to push the bill this far — I’ll keep you updated on the Senate vote as it progresses.

California’s Healthy Pets Act just got a lot more Hollywood support with a new celebrity-filled petition. Star Trek’s Captain Kirk, Grey’s Anatomy hottie Katherine Heigl, Studio 60’s Bradley Whitford, and CSI’s Jorja Fox, along with Oscar nominee Ryan Gosling, director Richard Linklater, and more than a dozen other Hollywood stars, including Captain Kirk, have signed a PETA petition pledging support for Assembly Bill 1634—the California Healthy Pets Act—which mandates spay-neuter surgeries for cats and dogs. The bill is scheduled for a floor vote this week. Did I mention Captain Kirk signed the petition?!?! (I know it’s not the first time PETA’s teamed up with The Captain, but it’s the first time I got to report on it. Thanks for understanding.)

This petition is just the latest act of celebrity support for the bill. In recent weeks funny guy Bill Maher recorded a “New Rule” supporting the bill and PETA released another PSA for the bill featuring Kevin Nealon, Mike White, Ami James, and other celebs.

It’s not just celebrities who are coming out in support of this bill. The Healthy Pets Act has already gained support from hundreds of animal protection organizations, veterinarians, city police departments. The vote is coming up early this week and if you live in California the animals need your support. Please use our handy web form to contact your assembly person today. If you won’t do it for the animals’ sake, do it for The Captain.

Click the image below to view the full petition. 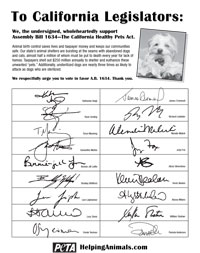