Frank Ervin, a vivisector from McGill University, operates the Behavioral Sciences Foundation/Primate Resources International on the Caribbean island of St. Kitts, which pays trappers to remove vervet monkeys from the wild so that they can be imprisoned in laboratories. The facility crams many monkeys into wooden crates and sends them on a terrifying journey in the dark cargo holds of airplanes to the U.S. and other countries to be tortured and killed in experiments. Ervin also performs his own deadly experiments on monkeys. These disturbing photos, leaked to PETA, are allegedly of monkeys killed in Ervin’s cruel experiments on fetal alcohol syndrome: 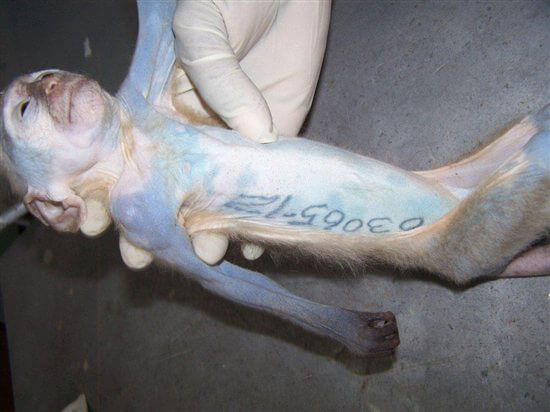 Ervin wants the U.S. to buy even more monkeys to experiment on, since, in his opinion, the monkeys are “agricultural predators” because they sometimes eat farmers’ crops. We’re sure that’s the reason he wants the U.S. to purchase the animals, not because of the profit that he stands to make. The Animal Rights Foundation of Florida (ARFF) has launched an initiative against importing the monkeys from St. Kitts, including sharing that St. Kitts’ own Ministry of Agriculture advocates for spaying and neutering and strategically placed feeding stations to control the monkey population and keep them away from crops. 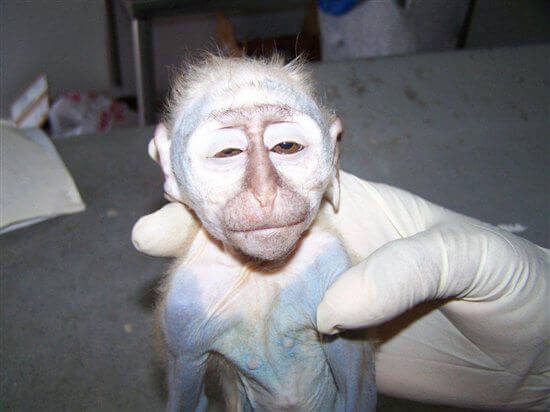 One U.S. buyer of monkeys from St. Kitts is the Army’s Aberdeen Proving Ground, which torments the monkeys in cruel and archaic chemical casualty training exercises. You can help end these torturous exercises and prevent the government from stuffing Ervin’s pockets by asking your senators and representatives to take action to end Aberdeen’s monkey laboratories.