PETA has its sights set on the University of Missouri (Mizzou) after experimenters conducted a slew of pointless tests on animals, which included cutting open rats’ skulls, injecting their brains with chemicals, and forcing them to complete strenuous activities. 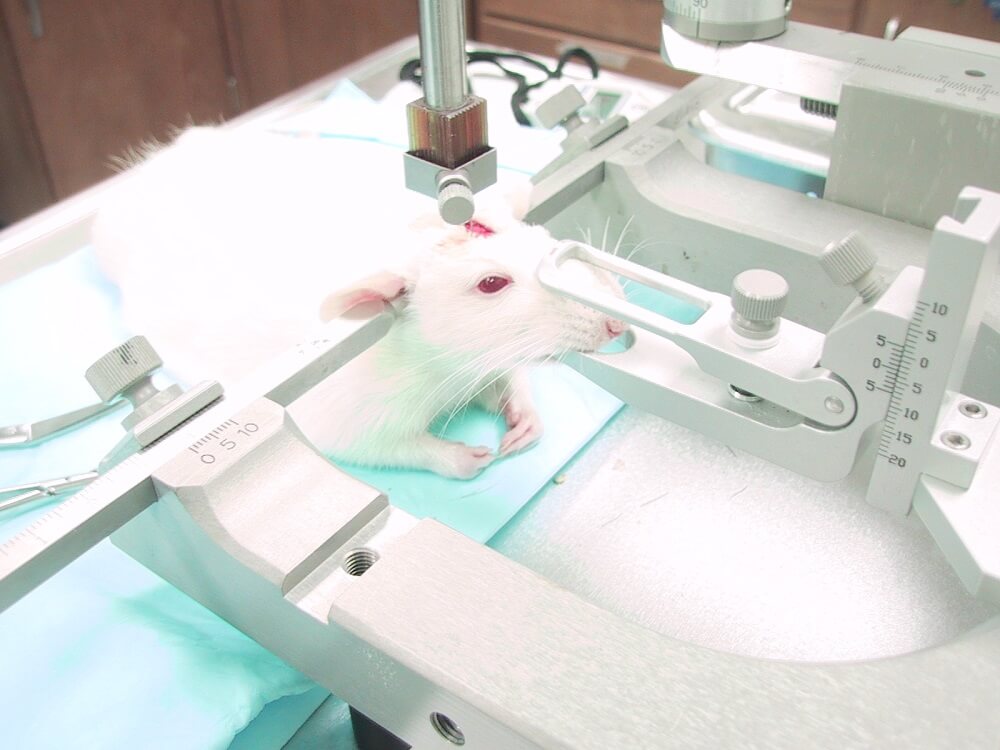 University of Missouri-Columbia experimenters cut incisions into rats’ heads, removed parts of their skulls, and injected an inflammatory compound into their brains using a device like this.

PETA filed a complaint with the school’s chancellor and vice president of research urging them to investigate and withdraw institutional support for the tests and to redirect resources into clinically relevant, human-based studies.

In the tests, Mizzou experimenters cut incisions into rats’ heads, removed parts of their skulls, and injected an inflammatory compound into their brains. They were then forced to climb a 100-centimeter-long (more than 3 feet) ladder with weights taped to their tails, subjected to a battery of fear-motivated memory tests, and ultimately killed.

Cutting open animals’ heads and taping weights to their tails in order to show what we already know from human studies is wasteful and an insult to science.

The purported aim of the tests—to determine whether resistance exercise training can mitigate cognitive deficits in rats—has already been achieved in multiple studies and reviews involving humans.

PETA also sent a letter to the Journal of Applied Physiology, which published a paper reporting these experiments, demanding that the article be retracted for failing to meet the journal’s stated standards relating to both animal welfare and relevance to animal and human health. Indicative of a complete disregard for the lives taken in these pointless tests, the Mizzou experimenters failed to provide any information regarding administration of pain medication or fully describe how they killed the rats at the end of the experiment.

Mizzou is just one of countless nightmare factories for animals. In the taxpayer-funded laboratories of the National Institute of Mental Health (NIMH), untold numbers of mice and rats are used in pathologically cruel psychology experiments that induce extreme fear, panic, despair, terror, trauma, and a sense of helplessness in the animals.

There’s no rescue and no happy ending in store for them. But with your help, we can shut these senseless tests down right now.