In advance of the Minnesota Vikings’ home opener, PETA is unveiling the anti–trophy hunting message that it added to one of the more than 14,000 Legacy Ship bricks at the team’s new U.S. Bank Stadium. The move comes after Minneapolis local Walter Palmer infamously hunted and killed Cecil the lion last year and aims to encourage fans to bench cruel activities like hunting and make the Super Bowl their only target this season. Bricks were purchased by fans as a way to honor their connection to the team, and PETA got in on the action by ordering a brick located at marker number 15. 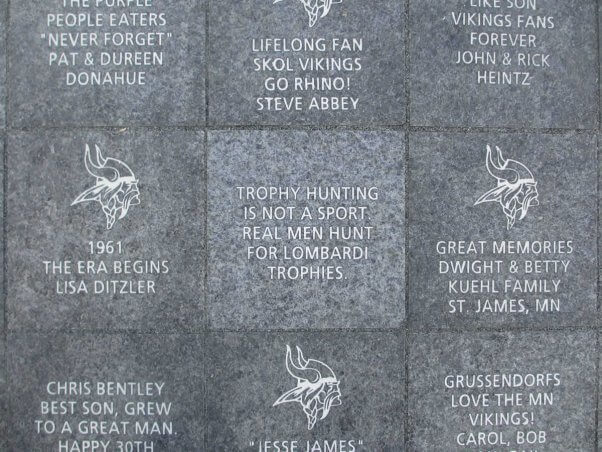 “Killing animals and hanging their heads or corpses on the wall is not a sport—it’s a form of sadism that decimates wildlife populations and disrupts ecosystems,” says PETA President Ingrid Newkirk. “PETA’s Legacy Brick urges Vikings fans to support their team in its hunt for a playoff spot and a Vince Lombardi Trophy instead.”

In addition to killing millions of animals each year, hunters have contributed to the extinction of species all over the world, including the Tasmanian tiger and the great auk. Hunting any species disrupts animals’ migration, hibernation, and eating patterns, and game-management agencies manipulate animal populations to maximize the number of animals available to be killed. Trophy hunters—unlike natural predators who kill primarily sick and weak individuals—specifically seek out large, healthy animals who are needed to help keep populations strong.

Numerous animals are injured but not killed by hunters, escaping only to die slowly and painfully from blood loss and starvation. Cecil the lion, for example, was shot with a steel arrow and left to suffer for 40 hours before he was finally killed.

Join the thousands of people calling on UPS to help bears, elephants, rhinos, and other animals by ending its practice of shipping animals’ dead bodies as hunting trophies.